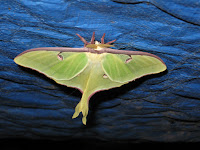 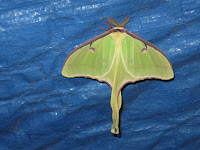 We spent the weekend on the St. Francis River and Saturday night saw a spectacular sight. It was a Luna Moth. He (I believe he was a male) sat quietly on our blue tarp for some time, allowing us to study, snap photos, and marvel at the unusual sight. People rarely see Lunas because they only fly late at night.

Lunas have a wing span of 3-4 inches and are a beautiful pale green with transparent "eyes" on their wings. They hatch as a green caterpiller and spend the first two months of their lives eating the leaves of hardwood trees. They need a lot of food, for after they emerge from their cocoon and reach adulthood, they're no longer capable of eating!

Adults are strong fliers that are attracted to light (we had a bright overhead light burning above the tarp). Mating takes place after midnight and eggs are laid that same day. The adults live for only about one week and mating is their only purpose. Our moth may well have been at the end of his life when we spotted him.

Sightings of Luna Moths are most frequent in the eastern half of the United States, and are more often reported in Missouri than any other state. Once quite common, in some areas Lunas are actually considered endangered.

Moths and butterlies are fascinating creatures. If you'd like more information, be sure to check out the Butterflies and Moths of North America website.

Seeing a Luna Moth was a rare and special treat. May you, too, be so lucky one day!
Posted by Pat Wahler at 9:46 AM

A beautiful sight indeed! I had no idea about the lifespan and/or other information! Always interesting to learn something new.

What a spectacularly beautiful creature!