What's Up With the Umpire? 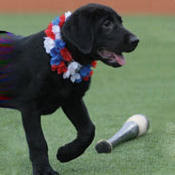 Who'd have thought it? On April 27, Yogi Berra, the Greensboro Grasshopper's mixed-breed mascot, created a furor for doing what comes naturally. It seems he's been trained to fetch balls in between innings when sent by his trainer. Apparently he's performed well since he started in 2008. But recently, upon Yogi's enthusiastic return to the infield, he squatted and...well, you can guess the rest.

Yogi was ejected from the game by a not-so-happy umpire.

All I can say is...are you kidding me? No one worries about baseball players spitting a disgusting stream of tobacco on the field (giving a whole new meaning to the phrase sliding into first). Why can't they deal with a dog?

Yogi is the first canine ever to be ejected from a baseball game. And there's no word yet as to when (or if) he'll return.

Mr. Umpire, check your rulebook. I believe you're the one who committed the error.
Many others in baseball have been forgiven for much less. Yogi had a momentary lapse. Be fair. Take him out of the Hall of Shame and get him back on the field where he belongs.

It'll give a whole new meaning to the immortal words, "Play ball"!
Posted by Pat Wahler at 7:00 AM

Children turn over their milk, dogs relieve themselves. . .deal with it, Mr. Umpire! We're talking about nature here. And I agree about the disgusting tobacco juice spat everywhere! Get rid of that first before poor Yogi is cast out!

Poor Yogi! He was only doing what comes naturally.