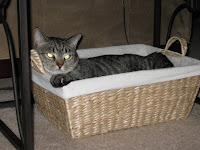 When we adopted Bogey two years ago, I basically turned the spare bedroom into "his" room. It contained his litter box, food, water, toys, scratching post, and bed. This would serve to acclimate him to a small area before he gradually transitioned into getting the run of the entire house.

Recently I've been thinking about moving the litter box to the basement. But moving a litter box can sometimes confuse cats ("Who stole my bathroom! Guess I'll just use the carpet until it comes back."). So I've put off doing the deed.

On Friday the carpet cleaners came. Everything had to come off the floor anyway, so I moved all of Bogey's "essentials" to the basement and added a comfy bed and new scratch post with plenty of catnip (Bogey is seriously addicted to catnip, but that's for another post). I added Bogey and shut the door.

He spent the entire day in the basement. Each time I checked on him, things looked good. He definitely used the litter box. On Saturday, I opened the door and gave him the run of the house. All of his things remained where I'd taken them. Bogey can be stubborn, so I kept my fingers crossed. We went downstairs a few times to refresh his memory on where things were.

As of today, there have been no accidents. He's using the litterbox in the basement like a charm. I feel like Professor Higgins..."By George, I think he's got it!"

Failure to use the litterbox is a prime reason for cats to be surrendered to shelters, so I feel grateful that Bogey has gotten into the spirit of things so quickly.

And I'm sure the fresh catnip didn't hurt.
Posted by Pat Wahler at 5:59 AM

Your patience and common sense have paid off, pat. If only all owners were so sensible.