Another Leap into Technology

Ever since my first cell phone, I've used the device for nothing more exotic than as a basic tool for making and answering calls. Isn't that why you have a phone...to talk? I swore I'd never text until a few friends began to send me messages. And because they were at work, I had to text them back in reply. Mind you, texting isn't hard, it just takes so much longer to do than simply calling and talking. But long story short, I now do a limited amount of texting, too. Which leads me to my next leap into technology.

At the end of May I was at a conference where on the first day we were herded into a room due to tornado warnings. Everyone pulled out their smart phones or iPads and checked the weather radar. That's the first time I thought having a smart phone might be, well...smart.

It just so happened that I had passed the two year contract time when I typically buy my next basic phone, so I decided to go in with an open mind, and plenty of questions. As you might have guessed, here's the result of my shopping expedition: 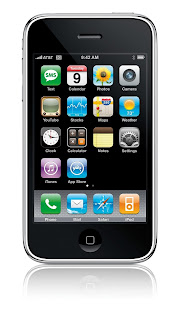 I am now the proud owner of last year's model of the iPhone. Okay, so I didn't get the latest model. But since the 3G is being phased out by the 4G, it only cost me $50! I call that a great deal.

The features seem pretty simple. It comes with basic applications to do the things that most phone users need to do along with a few extras. I've figured out most of them. In fact, my learning curve has been less on this phone than any other, since it politely gives me directions in nice BIG letters. Now I just need to figure out all the new capabilities.

For example, I can check my emails and search for information. The phone gives me driving directions. It plays music. I've added apps for weather radar views and a really cool astronomy feature that identifies overhead stars, planets, and constellations. One downside I've noticed is that internet use drains the battery ultra-quick. It's good to keep the charger handy.

All in all, I'm loving this new phone, and Apple is certainly not paying me to say it.

If you're a tech-know-not like me, don't fear a smart phone. It's great, though I'm spending way too much time playing with it. A smart phone could definitely become addictive.

Is there an app for that?
Posted by Pat Wahler at 7:30 AM

For the simple reason that I think technology plays a serious part in our societal disconnect,I've been putting off the inevitable for awhile now. I hope to further delay until January, when Stumpy and I go mobile.

I hope to NEVER text, but look forward to some of the other capabilities a smart phone provides.

I would SO love one...but can't afford the monthly costs! I use a pay as you go plan and generally spend about $10 a month for my phone!

you are better than me! I just got the new phone that Sprint is promoting (the one where cats are taking over the Internet, surprise, surprise). Basically I like it but there are things I still haven't learned yet. It is quite a challenge!

thats it?!! You will love it
Benny & Lily

Pat, each new function is like discovering uncharted territory. I am amazed when I figure out how to do simple tasks on my phone. Ahhh, technology. I am so challenged.

You're very high tech now! I do really want an iPhone...

Good for you! By the end of the summer I'll be looking to replace my phone, so I might finally get smart.
Donna

Congrats on your new phone! My kids use theirs for so many good purposes, they can be so helpful. I don't have one because the monthly fee is pretty steep.

Wow - you really did get a deal! My hubby has one of those do-it-all phones and loves it. Like you, I don't do much with my phone except talking and a little texting. My kids tease me because it takes me forever to write a text message. They think it's ironic, because I'm a very fast typist. One of these days I'll step out and get a fancy phone. :)

I'm way behind the times. I still write with a pencil and use two Dixie cups and a string for a phone!!

Great, Pat! I'm always very slow to changing and accepting new technology...and then when I finally do, I say "What took me so long? Why did I not want this??" And I eventually get all the gadgets that I said I would never get! LOL
Right now I'm still loving my Blackberry and don't want a different kind....for right now, that is! :)