A couple of weeks ago, Hubby and I spent time in Louisville. When Hubby wasn't in his workshop sessions, and I wasn't writing, we found time to have a little fun. Without question my favorite "down time" activity was a trip to: 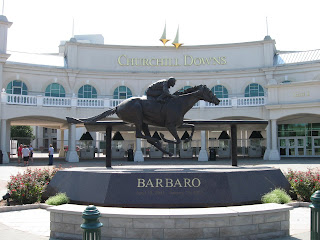 You guessed it. We visited Churchill Downs.
I've always wanted to attend the Kentucky Derby, which takes place in May every year at Churchill Downs. On Derby Day I like to sit in front of the television and watch some of the most beautiful horses in the world as they participate in the pre-race parade. The haunting and bittersweet song, "My Old Kentucky Home"﻿ is sung while the horses prance on the track in nervous anticipation. It's as though they know this isn't an ordinary race. I think it's one of the most beautiful moments in sports.
On our visit, we didn't see a race take place. No such activities occur at Churchill Downs over the hot summer months.  But the next best thing is checking out the Kentucky Derby Museum. It's open year round.
The above image is a statue of Barbaro, the valiant bay colt that came to the Derby in 2006. Barbaro had won every race he ever ran prior to the Derby. A heavy favorite, he went on to win the Derby, too, and not by a small margin. Hopes were high for him to become the next Triple Crown winner. But at the Preakness, Barbaro suffered a catastrophic injury, breaking his fetlock in 3 places. Months later, after multiple surgeries to save his life, Barbaro had to be euthanized. His remains lie at the base of this bronze statue which is placed at the entrance to Churchill Downs. His owners wanted the public to see his monument without requiring the price of admission to the museum. The piece captures Barbaro in action, flying with all four hooves above the ground.
But that's not all. Next time I'll share more about what we found inside the museum.
Posted by Pat Wahler at 5:42 PM

I remember Barbaro! What a sad story.

Sounds like a great time. The story of Barbaro is inspiring.
Donna

What a beautiful monument.

Horses are beautiful creatures. So glad you enjoyed visiting, even if you couldn't watch a race.

Louisville is really a beautiful city.

I adore horses and have always wanted to attend the Derby but never have.

I used to date a horse trainer years and years ago...it was so much fun going to the stables with him and petting the horses. I loved it!

louisville it's a relaxing place!

Isn't that a great place to visit! WE did that once and really enjoyed it.

I love horses, but have had little opportunity to be around them. Nice that you take advantage when you can!

"Bittersweet" is right. What a great trip, though.

I love horses...to look at, or to pet! Congrats on your Storm Country acceptance, Pat!! That's awesome!

Beautiful momument to a champion! Mom followed Barbaro's story and cried her eyes out when, well, you know. Its nice to see they made such a beautiful memorial that all can see. Enjoy your trip!

That sounds like a lot of fun, but so sad about Barbado.
Horses are so strong yet so delicate as well.