It's that time of year where humans all over the world like to add a little extra fun to the day of their dog, cat, horse, bunny...well just about any critter except a fish.

Okay, so maybe people are adding extra fun to their own day. Most pets are not enthusiastic about dressing up. You can see it in their faces. Anything from a trace of disgrace to a hullaballo of humiliation. Yet they tolerate the foolishness of their people with reasonably good humor. That's why I usually limit use of costumes to the length of time it takes for a few pictures.

When I dragged out Indy's much-used outfit, he went right into character by making a beeline in the opposite direction. His often shaky memory suddenly became sharp as a tack. A minor tussle later, he resigned himself into striking a pose. 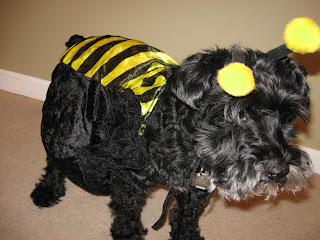 A game with Green Dog cheered the little guy up in no time. 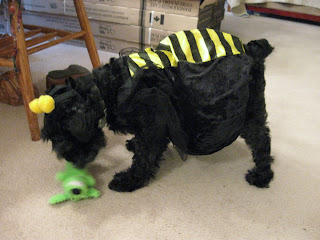 Bogey, however, is not so cooperative. I thought he'd enjoy bringing out his inner cool cat self. 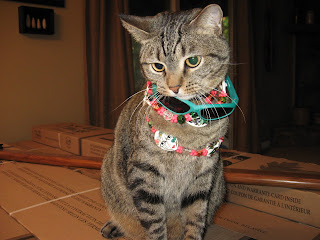 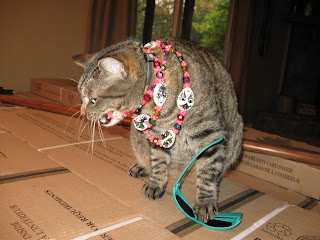 When the photographer became too sweaty to continue, the camera went into its case. All ruffled fur smoothed as costumes returned to the closet. Indy and Bogey got extra treats and pronounced the photo shoot sufficiently profitable. I drank a cup of tea and wondered if Ansel Adams works with such reluctant subjects.

But never mind all that. Today's the day for barking at doorbells and hissing at goblins.

How do your critters feel about Halloween?
Posted by Pat Wahler at 8:20 AM

Love the pictures of the reluctant models! Our first 3 mini schnauzers reluctantly accepted the odd dressing up for various fun events but were not impressed by it! Our 2 youngest dogs now have not yet had the joy of spooky kids at the door and scary Halloween decorations - my guess is they will have a good bark and try and scare them back!

How cute. Lil Smeag will just be himself. How boring.

I think the photo of Bogey (as adorable as it is!) sums the entire holiday up perfectly for cats and dogs! lol

I am like you, I make sure whatever I put on Cody and Dakota is super easy to put on AND to take off because I do the same, after a few photos they are DONE! Actually they are "over it" before it even starts!

I often wonder as well how people with cats and dogs who LIKE to dress up were able to have them be that way?

Happy Halloween and your candor was fabulous!

Stop on by for a visit
Kari
dogisgodinreverse.com

Happy Halloween. I was forced into a bee costume few years ago.

They gets a thumbs up from me for even trying to cooperate. No way - no how at this house.

How very cute! "Bee" sure to have fun with your "cool cat" and Bogey.

Bosco and I say Happy Halloween!

(Halloween makes him nervous, though. He doesn't understand why our normally quiet neighborhood gets so noisy once a year!)

Aww..the critters were too cute!

Lady, alas, was relegated to the utility room when my little pumpkins (aka Dorothy in the Wizard of Oz and a wee ballerina) came to collect their Halloween bags from Mimi. Other than the decorative autumn ribbon on her collar from the latest buffing and fluffing, she prefers to remain undecorated.

So cute! Love the costume! I'm glad Halloween is over -- time to put the costume away -- well, that is until the Santa Hat comes out in a few months.

Mom was kind to me again this year and I only had to sport a Halloween Jesters scarf/collar.
Now the action is all those cute kids that come to visit!
That has to be the best part!
I must say that both Indy and Bogey look pretty darn cute!

Love the photos! Our two woofers were kept in the family room behind a strategically placed baby gate. They did a lot of barking, but their tails wagged nonstop. They seemed to know all the bell ringing was okay. :)

Great costumes! We did not get dressed up this year. Mes wanted to come by and let you know that your healing purrs and thoughts worked! Our Daddy came home yesterday and we is all doing the happy dance!
Thanks yous and kisses
Nellie, Kozmo, the hairy slobbery sisters and our Mommy and Daddy

Oh, how cute!! Even your reluctant victim!