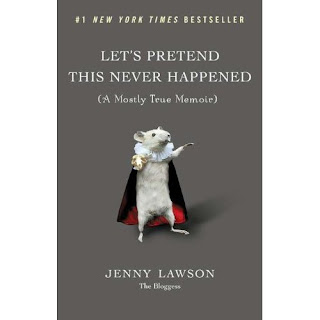 Normally I don't review a book on Critter Alley unless it is specifically animal-themed. However, I've made an exception for "Let's Pretend This Never Happened" by Jenny Lawson. Though the book isn't technically about animals, it does feature quite a few of them. Usually post mortem.

You see, Lawson's dad was a taxidermist and I don't believe it's an exaggeration to say that her father's sometimes unnerving sense of humor helped to shape Lawson into the person she is today. Stories on her "growing up" years will help you understand a little bit better some of what you'll read in the book. And maybe it will also help you understand Lawson's penchant for collecting fancifully taxidermied critters. Or maybe not.

Jenny Lawson originally gained fame for her blog aptly titled, "The Bloggess". It has followers in the thousands and posts that generally prompt hundreds of comments. Her first book, published in April, 2012 contains new material along with some of her best blogs, such as a chapter about a giant metal chicken named Beyonce, obtained after her long-suffering husband, Victor, told her not to buy any more towels. You get what you ask for, Victor!

In addition to her childhood, marriage, and attempts to become a mother, Lawson also discusses her battle with depression in a way that is both honest and humorous. Humor helps to heal even the most ragged edges of pain and Lawson is a master of satiric humor.

I devoured this book like a child gobbles cotton candy at a carnival. But don't expect it to be a serving  of frothy light sweetness. My advice to you is DO NOT read this book if you:

DO read this book if you enjoy a writing style that may ramble around the block a bit, but is laugh-out-loud funny. I read it on an airplane. My seat-mates looked at me in horror when I nearly snorted my soda out my nose (more than once). Guess I should add a disclaimer that you really should be careful where you open this book.

Are you looking for a highly entertaining summer read which will go quite well with any flavor of wine slushie? Try "Let's Pretend This Never Happened".

Two thumbs up from me. If you've read it, what's your opinion?

Hi Pat,
I haven't read it, but it sounds funny--just from what you've written about it--and the cover!
Donna

I know I'd enjoy a book that would make me snort out soda thru my nose....lol!

Interesting... Hmmm. I'll add that to my "will read" list. Hopefully I can get it cheap in our local bookstore.

Careful with that soda, Pat.

I recently came across your blog and have been reading along. I thought I would leave my first comment. I don't know what to say except that I have enjoyed reading. Nice blog. I will keep visiting this blog very often.

I LOVE off beat humor.

That sounds like the perfect book for me - I fit all the above criteria I'm afraid, LOL.
Lynne x

Definitely want to put this on my reading list. Thanks!

Oh Wow! Any book that makes soda come out your nose is well worth reading!
Nellie's Mom

I'm with the Cat from Hell on this!

I've had the oppertunity to read
her post, about about a giant chicken named Beyonce. If her book is anything like the blog post I will deffinately be reading it!
Thanks for the sugestion.

Sounds like a good read. Love a good laugh!