Feeling bored and just a little blah, I drove down the same familiar road on my way to work this morning. For those of you who live in my area, that's along a stretch of South River Road, not far from the Family Arena. On my right were thick trees and scrubby underbrush that hid a somewhat shrunken (we're in a major drought) Missouri River. On my left were more trees and underbrush screening a residential area.

The only things on my mind as I drove along were the ga-zillion other activities I'd rather be doing. Okay, so I was cranky.

In a heartbeat, a critter leapt from the cover of underbrush on my right, obviously intent on racing across the road. He/she was so close, I feared hitting him/her and jammed my foot on the brake to slow down.

My brain tumbled thoughts in this exact order:

A beautifully spotted bobcat, larger than your average housecat and fast as an Olympic runner, sprinted from one side of the road to the other. I slowed to a crawl and twisted my head around to watch until he disappeared.

With no chance for a camera shot, I hunted for a picture to give you an admittedly anti-climactic reenactment of what I saw. 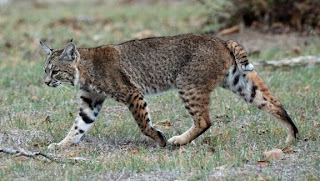 Squint your eyes and imagine him/her not quite so long-legged and with much more distinct spots, running like his/her stubby little tail is on fire and you'll see exactly what I saw this morning.

I've seen a lot of creatures in the wild around here, but this one had to be the most awesome sighting of all.
Isn't it amazing how something like that can turn an attitude around? I felt excited and energized for the rest of the day. And here I am (ta-da!) writing about it instead of vegging out in front of the t.v.

How about you? Have you had any nifty little surprises lately that make you feel like you've just won a million bucks?

I know EXACTLY what you are sayin!! THRILLING isn't it?

Wow - I didn't know we HAD bobcats here! How cool. It would have made my day, too.

I know that leap in your chest! Yesterday morning, just before dawn about 3 am), I saw the cougar that lives in our area. She was running along the bank on the other side of the river. They are so aware - the minute I moved my head to see over husband, she dove for cover!
I felt elated!
Nellie's Mom

wow, that's really amazing I'm sure that you have a great day!

Bobcats, we never seen one before. How thrilling! Have a happy Friday.
Best wishes Molly

That must have been amazing!
Lynne x

I heard about a month ago they caught a bobcat in my neck of the woods. Beautiful creature, but I wouldn't want to have to face it...

Awesome! That happened with a Lynx here not long ago. Wildcats are so beautiful.

Oh that must have been a thrill. We were camping at Johnson Shut Ins years ago and heard what sounded like a kid shrieking. Grabbed the binoculars and saw a mountain lion on the opposite river bank, but the park people did nto believe us.

We saw a fox one time trying to cross a busy 4 lane highway. M said she couldn't believe her eyes at first that it was really a fox. We live in a city! Don't usually see fox in the city limits.