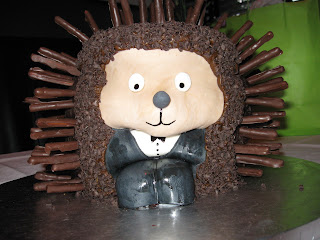 I'm sure every family has a story that they love to tell over and over again. Usually the star of the story gets a bit weary of hearing it, but hey, that's what families are for, right?

We have a story that involved our oldest when he was an adorable first grader. The incident happened during a surprise we got while attending the first grade school play and had to do with a "pretty porcupine". I won't go into details, as it will likely appear someday in an essay, but I can tell you our son wishes we'd forget the whole thing. So of course rather than forget it, at his rehearsal dinner a few weeks ago we unveiled a surprise groom's cake.

Our son disemboweled this cute little critter with the gusto of a starving hunter. While he cut and conquered, we took delight in sharing the story with the bride's out-of-town family. The porcupine had leaped right out of the bag, so to speak, and our son wasn't very happy about it.

Come on, doesn't anyone have a sense of humor anymore?

That was a pretty cute cake! Would love to hear that story sometime! Yes, our families all have them and isn't that what their for, to embarrass our children?! LOL!

Ha ha nothing better than telling a story that involves some embarrassment. Glad you were forgiven. Have a super Saturday.
Best wishes Molly

Sounds like we have the same sense of humor, Pat. That cake is so cute. I'm sure the story is a doozy.

It is a parent's duty to embarrass their kids, LOL.
Lynne x

Well at least that story came with an adorable cake! Sounds like a pretty good trade-off to me.

Ouch. Parents! The things you do to make your children suffer emotionally. LOL.

What a great grooms cake, dying to hear the embarrassing story behind it!

The cake is so cute, how could he stay mad for long?

So cute! And it's a mother's job to embarrass her children every now and then, especially in good fun. :)