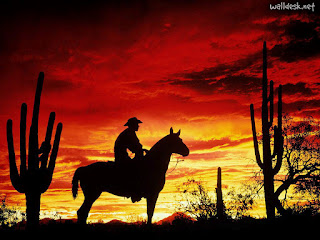 One of my favorite movies is "True Grit", the story of what happens when a young girl seeks the help of an older and slightly jaded lawman to avenge the death of her father. I first saw the original version starring John Wayne and Glen Campbell decades ago. A few years back a new version came out to rave reviews. Though I still haven't seen that one, most people give it two thumbs up.

The movies were based on a book of the same title. It's told from the point of view of a young girl called Mattie, in a tightly worded, nearly Spartan style. I enjoyed its touches of subtle humor. If you haven't read "True Grit", you definitely should.

Did you know that the character of Rooster Cogburn was based on a real cowboy?

Brett Cogburn writes about his grandfather in a book titled, "Rooster: The Real Life and Times of Rooster Cogburn". I haven't read it yet, but have placed the volume prominently on my list because I've always loved a good cowboy story.

You can imagine my surprise and delight when I received an email from Mr. Cogburn, himself. A four sentence flash fiction story I submitted to his "Best Western Never Written" contest was selected as one of 39 winners. It will be published in an anthology from High Hill Press titled "Cactus Country III". What's even more fun is that several of my writer buddies will also appear in the same anthology.

Brett Cogburn has a wild and wooly website you're sure to enjoy exploring. Check it out at http://www.brettcogburn.com/  If you click on the header titled "Blog" you can read about the flash fiction contest. All winning entries are posted.

Congrats, Pat! How fun to see names of winners that are also my writer buddies. I really liked your four-sentence story, too! :)

Wow such a nice surprise email. Have a super Sunday.
Best wishes Molly

Oh, that is SO cool!! Like you, I haven't seen the newer version...but loved the original, as well as "Rooster Cogburn & the Lady", with Katherine Hepburn. Also loved the fact that in the movie he had an orange-marmalade kitty (like our Tibbs) named "General Sterling Price" (the General, (not the kitty, LOL) was from Missouri, BTW, buried in Bellefountaine Cemetery in Saint Louis, where I love to take photos...)
Congratulations!! I will check out that site, too!
Hugs,
Anne

That is great, many congrats!
Lynne x

Ya Pat! Let's put in our western duds and do a book signing :)

Congrats. I'm glad you are getting recognition for your wonderful stories.
I didn't realize True Grit was a novel. I'll put it on my TBR list.
Ann

Oh my gosh! You're such an amazing person. I wish I could write as awesome as you. I've always dreamed of submitting my short stories but I know they're somewhat poorly written.