Thoughts on the Fourth 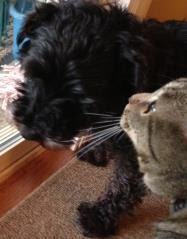 It's almost that time...bombs bursting in air, critters crying, No fair!

It's true I've gotten old, slightly neurotic and  more than a little cranky, but in my opinion, Fourth of July festivities are better observed from afar.

Unfortunately, my neighbors don't share that opinion. I've heard firecrackers and bottle rockets go off for several days now and expect the hoop-la-la to continue (with varying degrees of intensity) well beyond the upcoming weekend. Why is this a problem?

For one, Indy would rather sneak a pee on the floor than go outside in the middle of World War III. Though his hearing is now quite limited, it's apparently good enough to pick up the sounds of nearby explosions. He is not amused.

Bogey is less fireworks-challenged than Indy, although he does resent losing the entertainment provided by the birds and squirrels. You have to wonder what they must be thinking as they pack up their nests and skedaddle from the area huffing, "There go those humans again, blowing up the neighborhood. They sure can make property values go down in a hurry."

Fortunately, once things settle down they'll be back. And probably bring their friends, too.

Yes, we all have our methods of handling the Fourth. It looks like mine will include a bottle of professional strength Resolve and a great big sponge.

Labels: animals, Fourth of July, peace, things that scare us

Alas, poor Indy! I, too, could do without the fireworks, but we will have them here also. Fortunately, they'll be at a specific location--none of us "oldies" on this street will be firing them off.

Assure Indy and Bogey that "this, too, shall pass"--at least until next year!

Sending sympathy and an extra sponge!

That sucks! I hate fireworks too!

Oh dear let's hope it passes quickly and doesn't go on until the weekend. Good luck. Have a wonderful Wednesday.
Best wishes Molly

Is there anything worse than fireworks, all our dogs hate them and I am fed up of reading about animals that have been injured.
Lynne x

Let's keep our fingers crossed that it ends soon after the 4th (although it will probably continue until the weekend is over or until everyone runs out of their fireworks, whichever comes LAST.)

This is our LEAST favorite holiday... butt only beclaws of the HORRIBLE BANGING... We DO love all the Red White and Blue pawt though.

Why fireworks are legal in some cities we will never know
Snorts,
Benny & Lily

This is our least favorite holiday just for the fact that we have neighbors the same way. It goes on till 2 am and then before and after too. So far it is so hot and they have banned them in the outlying areas it has not been too bad.
Bailey hates them and barks and barks and we get no sleep.
hugs
Bailey, Hazel & Greta

I've come to hate the 4th of July, which was once a day, but is now a season. From mid-June to mid-July, my dog is afraid to go outside in the evening, and I have to close the windows no matter how much I enjoy the breeze, all so that people can blow things up for weeks on end. I don't get it, I hate it, and it makes me long for winter.

I don't know of any caring pet owner who enjoys the noise of neighborhood fireworks. Miro doesn't mind the noise but Alanis always hated it.

Such a pain aren't they, hopefully soon over. We hate them too.

I was at a barbeque yesterday where the host's dog chased loud motorcycles passing by, up and down the fence. How badly she wanted to catch one. The fire works were like air motorcycles for her. My daughter's pooches and kitties were terrified, though.

HA! We have a cat door that Ryker still uses to go out into the yard. But yesterday and this morning I had to personally escort him outside and stand guard or else I would have to get the resolve out as well!

We weren't blasted with noise on the 4th, but last night our neighbor's kids threw a party (parents out of town) and they set off a round of fireworks around 2 a.m. Hope they won't repeat it tonight.

We had taken a walk right before the "big" bang and there was a little bunny on the driveway. He was scared stiff with all the pops going on. My Smeagol hasn't gotten a lot of sleep (at night) this weekend.