If you have a writer friend who has recently disappeared, you may wonder what happened. I'm betting your pal is participating in NaNoWriMo. As many of you know, November is National Novel Writing Month, affectionately referred to as NaNoWriMo. The challenge is to get at least 50,000 words toward a novel on paper. You can outline and think about your story all you want, but can't begin writing it until November 1. Likewise, you must stop writing by midnight on November 30.

I've done the challenge 3 out of the past 5 years and reached my goal each time. It's stressful, but definitely exhilarating. This year I opted out, which makes me feel like a real slacker. After all, NaNo is addicting in a stuff-yourself-with-carbs kind of way, but I'm going cold turkey...until next year.

To appease the guilt gods I plan to drag out my last year's NaNo project this month and focus on trying to turn it into a real book. Haven't started revising yet, mind you, but it's on my list.

Other things have been taking up my time. Aside from my sister's health issues (Update: final pathology report showed everything benign! Thanks again for your prayers and positive thoughts), I've been working on another project. 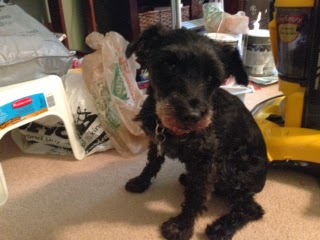 I hate it when Mom does a project. 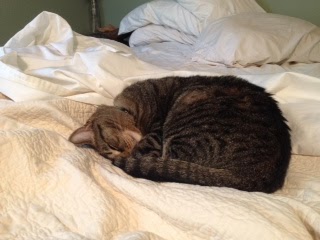 I am doing a bathroom remodel and have a few post-project observations. First, who'd ever imagine redoing such a tiny bathroom would take so much time and cost so much money? Second, know what the contractor will and won't do. For example, I had to do the wall prep, painting, and sealing of floor/grout. I hadn't planned on that.

Anyway, here are a few of the "before" pictures. 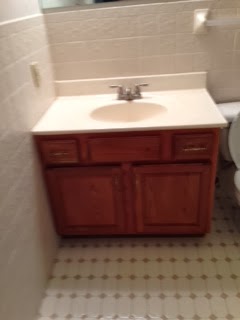 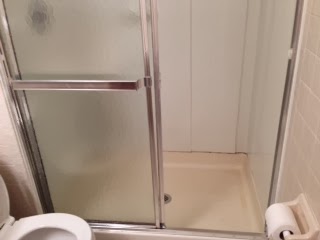 The contractor stripped the bathroom down to the studs. Now, nearly 3 weeks later, the job is complete. I'm pretty pleased with it and will post the "after" pictures later this week.

How exciting about the bathroom AND your revisions. I think there should be a NaNoReMo, wherein writers REVISE what they've written in previous years.

Have a serene Sunday if you can as it looks like all go over there. Hope the writing goes well.
Best wishes Molly

Can't wait to see the after pix. Human projects are good snooze times for furries.

Pat--I have bathroom envy--or will, when you have the big "reveal." I would looove a new bathtub and shower enclosure...

I hate having work done on the house, so stressful.
Lori, from What Remains Now is doing the NaNo thing.
Lynne x

Remodeling is not for the faint of heart! I have a bathroom in similar shape and just don't have the time or $$$$ to deal with it!

I often wish they hosted the NaNo event in other months...November is always so busy!

The NaNoReMo is a large undertaking!

Stop on by for a visit
Kari
http://dogisgodinreverse.com/

Am curious to see what the new bathroom looks like! Bet it is awesome!

Good luck, hope it turns into a book
Lily

So happy that your sister had good news health-wise. Prayer really does help, and God bless the doctors!

I look forward to seeing your "after" photos.

So many great projects, Pat! And nothing wrong with making revisions a priority this year -- that in itself is a big undertaking. I'm so glad to hear that your sister's health issues are resolved. Prayer really does help.

Wonderful news about your sister!
You are a tease...I want to see that new bathroom! I love remodels!

I remodeled my bathroom about this time last year and it took 2 months, but turned out to be wonderful. I gave NaNo a miss this year too and will work on revising and editing my latest mystery.
Ann

Hi Pat, I've been out of town and am just now catching up on blogs. I'm so glad your sister is well and I hope you know that I would have kept her in my prayers had I known about the surgery. I'll do so anyway, just because... I opted out of NaNo last year and felt really guilty about it, so I liked that you are feeling that way. I decided to work on my old NaNo - and anything new that I add will go into the count, so that's my story... they are calling that NaNo Rebels and it's acceptable! Good luck on that bathroom project.

You're not alone in Slacker City, Pat. I opted out of NaNo this year, too. I'm trying to get my manuscript ready for submission which won't happen if I'm NaNo-ing. :)

Well, if you'd still like to participate in NaNo you could join our round-robin! We could really use another writer to help make it a success, and you'd only have to write a paragraph or two! Please do consider it!

We had wondered what that was about LOL.. Thanks for the info. Pop by for a visit, we are a bit mad..BOL xox