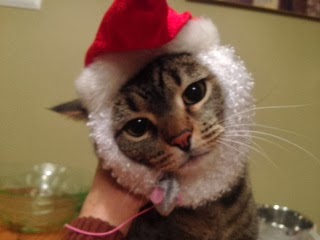 Bogey spent the week with pencil in paw, working hard to come up with his list of favorite things. He did take time out to pose (sort of) for a picture. Please disregard the hand subtly working to prevent him from removing the Santa outfit. Said hand is now on brief medical leave after a few well-placed puncture wounds.

Despite the drama, we'd like to present Bogey's favorite things:

1. Feather teaser-You know the ones. They're attached by a string to a plastic wand. Whip the feathers around and watch your kitty turn into a tiger. Down, Simba, down!

2. Treats-Bogey adores kitty treats. He particularly favors the Friskies line of treats with a crunchy outside and soft middle. Apparently they are so yummy that he'll sit up and beg like a dog to get one.

3. Box-Any size, any shape, if there's an empty box, Bogey will climb inside. Even if the box is half his size he can somehow stuff his chubby self in. This obsessive box behavior looks a lot like Houdini in action, if Houdini had four paws and fur.

4. Grooming brush-I use a short-wired grooming brush on Bogey. Using the brush amps him up so high it's a good idea to run when done. There's nothing more dangerous than an ecstatic cat.

5. Water fountain-This is indeed the Holy Grail of Bogey favorites. Spoiled boy that he is, he wouldn't dream of drinking from a bowl. And if I so much as unplug his fountain for a few minutes to wash it, he carries on like someone just smashed his tail in a door. A water-loving cat? Welcome to my world.

We hope Indy's and Bogey's suggestions come in handy when finding a gift for your four-footed friend because time is running short. Can you believe there are only 18 more shopping days til Christmas?

Pat--I thought that hand was there, trying to yank the outfit off, because Bogey had insisted on wearing it for three days straight...

The water fountain is funny. Bogey is one lucky cat!

Looks like a great list and you can never have too many treats we say.
Have a super Saturday.
Best wishes Molly

I was just about to say, you will pay for that but seems you already have, LOL.
That seems a very reasonable list. Hope the water fountain will be gold plated and crystal though....
Lynne x

WOW BOGEY... you have quite a list going there... how about some of those grrrrreat SOUR DEANS ? They would be super fur your Stocking Gift.

Bogey, you has a great selection of kitty likes. I casnot see the fountain one being fun, but the others sound great!
~Lickies, Ludo
(Oh, and I guess Arran)

The water fountain sounds like a great idea for my three kitties. Tell Bogey I said, "Thanks for the gift idea!"

Your Santa babies are darling. A reminder of happy times with old kitty.

That is a helpful list, thanks! Our kitty clearly hates the condo I got him, so I will be returning it for something cheaper. Your Bogey picture is ADORABLE. Definitely worth any wounds incurred. My daughter tried reindeer antlers on Catsby and got a picture of what looks like a furry sack of potatoes dangling in abject shame.

I couldn't wait to see Bogey's list -- and what a cute picture! You are so creative, Pat. This entry is just adorable!

Better add some catnip to that list!
You look fantastic in that Santa hat!

Oh my gosh, the pictures of both your critters are adorable. I'm partial to Bogey! Ha... getting a cat to wear that hat, no wonder you have puncture wounds.