When Hubby discovered a dead spider in the bathroom, he told me something no one wants to hear.

"See the fiddle pattern on his body? It's a brown recluse. I found one in the garage, too."

After I peeled myself off the ceiling, I ran to the computer. What does one do about this type of uninvited guest? Fortunately, my research suggested a simple solution. Get glue traps and set them out to capture the spiders.

I bought glue traps at the home improvement store and placed them strategically in obscure and dark locations throughout the house. Then I waited.

Three days and counting...my glue traps caught nothing. There's something really sinister about a spider who is not only poisonous, but also smart. I set out more glue traps but days later still didn't find so much as a speck of dust attached.

I chewed my lip and brushed my hair, trying to put the whole idea of spiders out of my brain. Bogey wound himself between my legs, waving his tail in typical fashion. Then all at once he bolted away, his tail swishing madly. I looked down. Something was on his tail. Something BIG.

I grabbed for him and quickly realized his tail had hit one of the glue traps. Let me tell you, when the package advertises "Professional Strength", it's no exaggeration. I couldn't get the trap off and screamed for Hubby. Hubby obviously recognized the edge of panic in my voice and ran to the rescue. While I held down a spitting, screaming Bogey, Hubby ripped the glue trap off. As you can see, Bogey's tail did not emerge unscathed. 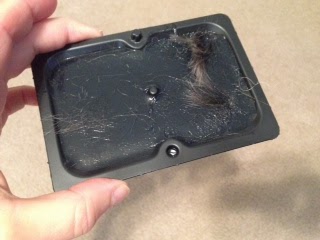 Bogey hissed at me and immediately began to administer emergency first aid. 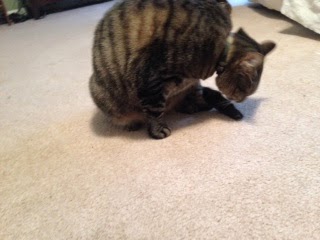 Now it's more than a week later and I still haven't captured anything but Bogey's tail. I suppose his unfortunate experience is really all my fault. When the name of a product is Tomcat, I ought to know enough to leave it alone. 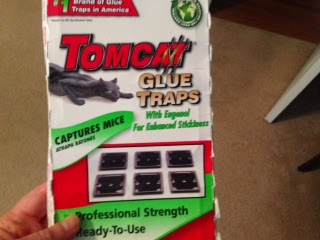 I'm so sorry this happened to your kitty. Owie! But I'm very happy you shared the story so we can all learn from this. I might well have done the same thing without thinking.

OMG, Pat! You tell such a great story! I loved the part about peeling yourself off the ceiling. I've only seen one recluse spider in all my years...(sounds like an old granny, huh?!) And it was inside a plastic grocery bag, inside a big bag of plastic bags! I don't keep very many since that time and I ALWAYS shake it and look inside a dozen times before I use it! And poor Bogey! And yes, it's very weird that the name of the gluey stuff is Tomcat!LOL

Instead of Tomcat, it should be called "Miss Muffet's Best Friend."

Poor Bogey. I'm sure in a few weeks he will have forgotten and will have forgiven you. To speed up that process, shower him with extra-special treats--tuna (the good kind) and bowls full of fresh cream...or whatever Bogey wants.

BOL, BOL funny. She has tears in her eyes. That is one funny tail LOL. Hope the spider problem gets sorted out. Have a tremendous Thursday.
Best wishes Molly

Sorry the Tomcat traps only caught the cat! Hope the spider is caught soon!

Holy crap, that is frightening! Glad it's a dead spider
Lily & Edward

Awww! Don't tell Bogey how hard I laughed at that "spider" you caught. And then I did it all over again at the package label.

OH dear Bogey! Thank you for stopping by it is so nice to meet you!

Thanks so much for stopping by our blog, we love meeting new furiends!! Our mom would of had to have been peeled off the ceiling as well. Poor Bogey's tail. :(

Bogey had every right to grumble, but I'm sure he forgave you for doing what had to be done. He looks none the worse for wear, as they say, and I bet his purr generator wasn't damaged one bit. :)

Poor Bogey!! I nearly died from a spider bite once...put on sweats that had been on the floor! I hate spiders now!!

Oh can we tell stories about those spiders. Two people our mom works with - a cameraman and a video editor - have homes infested with them.

And yes, their cat and dogs, respectively, got caught the same way, too!

Oh no, Pat, poor Bogey! But you tell a great story, and I find myself smiling this morning. Hope things have settled down by now, that you are still spider free, and that Bogey isn't being too much of a "recluse" after his frightening experience!