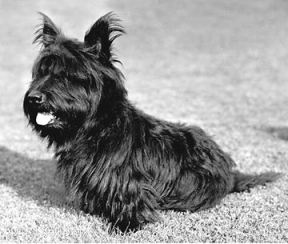 I recently read No Ordinary Time by Doris Kearns Goodwin. The Pulitzer prize winning book tells the story of Franklin and Eleanor Roosevelt during World War II. The Roosevelt presidency is fascinating. He and Eleanor's partnership equally so. But of course, one of my favorite small pieces in the book dealt with  Roosevelt's Scottish Terrier, Fala.

Fala came to Roosevelt as a gift from his cousin and it wasn't long before the little dog and the president were inseparable. Fala got a bone every day and Roosevelt often hand fed him. During the dark days of war, I imagine Fala's antics came as a welcome distraction in the president's life.

Fala got to hang out with other important people, too. There are photographs of him with Winston Churchill, the president of Mexico, and yes, even Ed Sullivan. Roosevelt once used Fala in a clever speech to poke fun at stories circulating about the costs of Fala traveling with the president. The speech effectively endeared him to the people and put his political opponents straight in the dog house.

After President Roosevelt passed away, Fala never seemed quite the same. Eleanor told a poignant story about Eisenhower coming to visit. Fala heard the sirens from the police escort accompanying the president. His ears perked up and he raced to meet the motorcade. Eleanor is certain Fala thought his master was returning home at last.

Fala's story is so entwined with the president's he was even memorialized with his master. 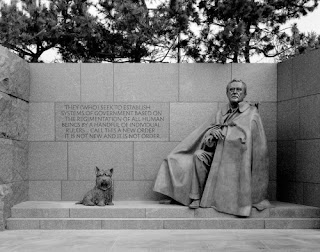 Fala died 7 years after Roosevelt at the ripe age of 12. He is buried next to the president and first lady at Hyde Park. For other charming photographs of Fala and FDR, click here.

Loyalty and utter devotion. Whether president, prince, or pauper, who can deny the connection between people and dogs?

"You want a friend in Washington? Get a dog."
~Harry S. Truman
Posted by Pat Wahler at 4:26 PM

I never knew about Fala until I visited Hyde Park in 2000. What a delightful story! I saw that statue you show here, and I've seen clips of the speech you mentioned. I even have a Fala tee shirt. Just now, I was informing Skittles all about Fala, and she approved so enthusiastically that she ran and got her bone to show me. :-)

Pat--Your last sentence is a gem. (The Truman quote is great, too, and so true.)

I'm glad you gave me some tidbits from the book because Goodwin's books are not my usual fare so if it weren't for this post, I'd have missed out.

Thanks. That heartwarming Eisenhower story was a great way to begin my day.

Sounds like a book I would like to read. Can't wait for retirement so I can catch up on reading
hugs
Mr Bailey, Hazel, Mabel & mom

What a heartwarming story. We tend to think of politicians as something less than humane (especially now in the throes of election campaigns) but this reminds they have private lives.

Congratulations on your retirement. Just read all the posts that I haven't had a chance to read... ack. You'll find with "retirement" that you are more busy than ever. At least in my case. I also love the urn for your doggie, how sweet. I used to be on a bowling league, but I haven't bowled in ages. Since my wrist has gone bad, I'm afraid it would do it more damage. But bowling is fun.

What a sweet story! Thanks for the day-brightener.

Wonderful post, Pat! The historical information is so interesting, and I love Doris Kearns Goodwin too. And of course who wouldn't fall for little Fala? Thanks so much for sharing.

I had no idea! Thank you for sharing this lovely dog tale. And I love the Truman quote. :)