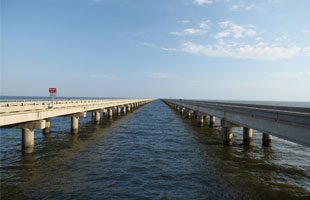 We scrambled to find a hotel room (thank goodness for cell phones) before we began crossing over swampland (alligators, anyone?) and then the vast expanse of Lake Pontchartrain. I couldn't stop looking at the lake long enough to take pictures, so this is a borrowed shot. When we crossed, the skies were heavy with gray clouds and the lake rough as the ocean on a stormy day...enough to send a little shiver up the spine. The causeway is 23 miles long-I think one of the longest in the country.

I couldn't help but be reminded of a dog our local shelter rescued from New Orleans after Hurricane Katrina. He was a big, sweet, goofy boy. We called him Pontchartrain (Ponch for short). 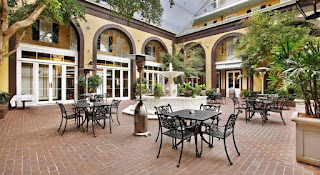 This hotel became our home base. The Hotel Mazarin is in the French Quarter. It has all the flair offered by French-Creole heritage, and here's my totally uncompensated opinion...The Hotel Mazarin is beautiful, the staff friendly and helpful, and it's located within walking distance of anything you might want to see (including a few things you might not want to see-it is close to the infamous Bourbon Street, after all) in the heart of downtown NOLA. Oh, and get this. Along with hotel keys, we were handed coupons for a free drink in the hotel bar (nice!). As an added bonus, a bountiful hot breakfast buffet including just about anything you could possibly want, is provided free to guests. If I ever go back to visit NOLA, I promise you this is where I plan to stay. 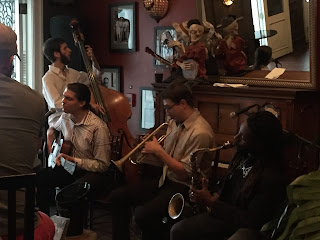 The hotel not only had fabulous drinks, but musicians good enough to prevent any of us from sitting still. We sipped and enjoyed the sounds of New Orleans. Then we ventured out to find dinner. 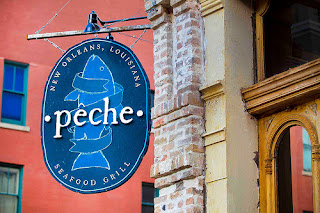 Peche (French for "fish"), certainly satisfied. It is a trifle pricey, but later when I researched the place I discovered it's won awards from the James Beard Foundation for culinary distinction and has excellent reviews from magazines such as Bon Appetit, the Wall Street Journal, and Southern Living. I guess there are times when girls simply must splurge.

Along an only slightly intimidating walk in the dark back to our hotel, we forced ourselves to stop in a beignet cafe. After all, you can't come to New Orleans without savoring a warm, sweet beignet, can you? 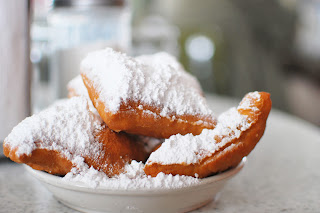 Ahhh. The perfect nightcap. Next time, I'll tell you how we spent our second day in NOLA.
Posted by Pat Wahler at 4:46 PM

The food sounds marvelous. I've only been through New Orleans, so it sounds like a fun place to go... definitely will check out the hotel you stayed in, if and when I ever get there!

I've been to "Nawlins" only twice, but I savored each trip. It sounds like you had a wonderful first day... can't wait to hear how you ladies rolled on the second one.

New Orleans is a place I've only visited once, and it was a "passing through" kind of thing, so we didn't get to experience it. I'd love to go back, and you've made it sound inviting. That hotel should pay you for this post! lol

Well, you have sold me on the hotel. we stayed at Holiday in, and it was awful. It sounds like you had so much fun. We went to get a benet but the line was too long. Is like bread dough or donut?

Your hotel looks really great.
Those beignets remind me of my sketch class about New Orleans.
Bet that was a fab holiday!
Lynne x

OMG, you in my favorite city to visit!!! The sights, sounds and tastes can not be beat! You girls enjoy yourselves!

This trip sounds absolutely fabulous, Pat! I've only been to New Orleans once, for a conference in the '90s. We crossed the lake in the dead of night, and it was the scariest feeling, so I can certainly relate to your shivers. The city truly has a flavor all its own. Thank you for capturing it all so well. I felt like I was reading a travel magazine, and your words conjured just the right images!

In college, we used to sober up before the drive back with beignets...we'd get ours to go and walk up on the levy. It never ceased to surprise me that there would be an musician up there...horn, sax, even a bass player once...in the middle of the night! We would eat, listen, drink coffee and watch the ships roll in.