We hauled ourselves up and hit the road running for another day trying to capture the highlights of the Daytona area. We walked on Daytona Beach (oddly, you can pay to drive on the beach if you want, this seems to me a bad idea for everyone concerned, but no one asked for my opinion).

Next we drove to Ponce De Leon Inlet Light Station. I snapped this photo with my trusty cell phone and thought it turned out pretty as a post card. 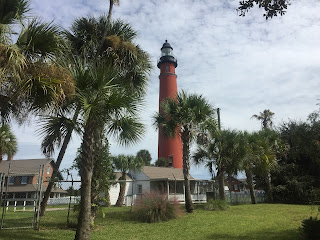 The lighthouse is 175 feet tall, and was completed in 1887 in an effort to decrease the number of shipwrecks in the area. It's had a few "makeovers" since that time, including getting electricity in 1933. Touring the grounds, I was struck by what a solitary life the lighthouse keepers led in the early days. It was a 24/7 job to keep a kerosene lantern burning for the safety of ships at sea.

There are a mere 203 steps to the very top, where one can go outside and walk around on an observation deck just below the light. This is not recommended for those with a fear of heights. I started up the steps with every intention of making it to the top. However, it was a humid and hot day, the lighthouse is claustrophobic-ally narrow, and half way up I started sweating like a pig, sure I'd die any moment. Alas, I wimped out and turned around. Maybe next time...

After seeing the sights (the grounds have many small buildings filled with memorabilia), we walked a short distance to the Marine Science Center. This nonprofit rehabilitates injured seabirds and turtles. It's also an educational center.

They have a touch pool in which there is a shark and several stingrays. We were allowed to touch first, and then feed them... 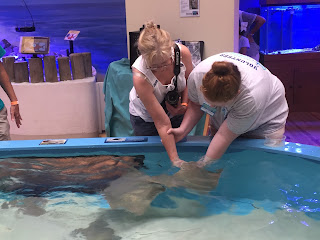 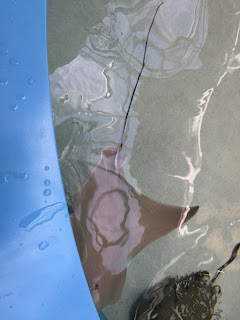 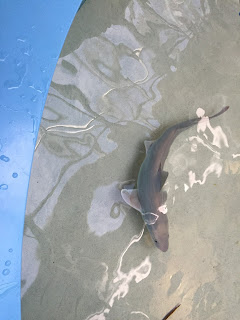 The stingrays were smooth and soft as velvet, while the shark had skin tough as leather. Fascinating!

We learned that most turtle injuries come as a result of collisions with boat propellers causing gashes in shells and amputated limbs. Any creature with injuries severe enough to make them unable to survive in the wild are kept on site to help educate the public. Here's one of the turtles curently in care. The floating green things are slices of green pepper, a special treat. 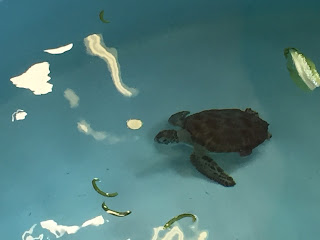 Here are a couple of the birds in care. Most of them have suffered wing or leg injuries. 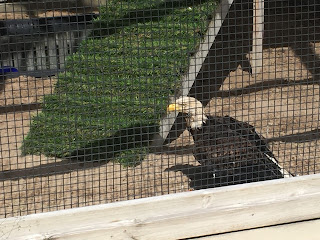 Your eyes aren't fooling you. That's a bald eagle. I had no idea eagles traveled to Florida. I thought they only hung out where it was cold. Is this the older eagle population? And if they winter in Florida do they call themselves snowbirds? This fellow didn't answer my questions.

Our final stop of the day was a local outdoor restaurant. It was close by and located right next to the water. Boondocks serves up great food, has beautiful scenery, casual ambiance, and is pet friendly. Many people travel there by boat. What more could anyone ask? 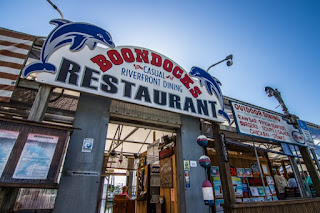 Check out the catfish swarm below the restaurant's dock. Do you think they are used to getting a few handouts? 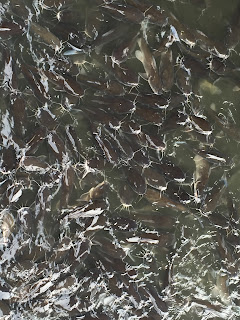 Whew! Another jam packed day. Back at home base we had a cocktail (or two) and collapsed. Then we read the weather report. Heavy rain predicted all up and down the coast. H'mmm. Should we reconsider our carefully laid plans?
Posted by Pat Wahler at 10:13 AM

I have always loved lighthouses, it's odd that considering they are basically the same building and shape, you get so many varieties.
That must have been a cool experience, stroking those fish.
Lynne x

I would certainly enjoy looking and touching the animals. I have scuba dived with stingrays and fed them, your right, soft as velvet!
The resturant looks like fun too!

Pat--I am doing Cathy Hall's challenge, so I wanted to thank you for taking us along on your trips (I guess there will be more as your retirement continues), along with your great posts about your kitty and other four-legged friends.

Someday, I expect to see a book of yours--Just Pat--on the bookshelf in a bookstore. I'm just nudgin'...

What great pictures. Looks like you had a lot of fun.
Ann

Thanks for sharing this. I love lighthouses, though the only one I've ever visited is the one in Savannah. And the eagle/snowbird comment cracked me up. Your trip makes my feet itch for travel.

What a fun time! Your photos and description are great! I love the lighthouse. Thanks for sharing.

How fun and educational, too. Love the lighthouse picture.