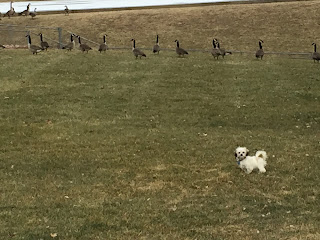 There's a lake behind our house. Geese love lakes. Therefore, we've been having a few problems with some large feathered birds at our house.

Apparently some of the flock decided it would be a swell idea to hang out in the far end our yard. No, nope, uh-uh. For one thing, this means poo everywhere, since geese do their duty approximately once every 60 seconds. For another thing, Winston believes goose poo is a delicious delicacy arranged for his personal enjoyment. Yuck.

To make matters worse, two of the birds actually came strolling up to the back door and rooted around in plantings right next to the house. Apparently this signifies their readiness to move in, build a nest, and have a plethora of little geese. Geese become quite aggressive and will attack anyone if they have babies to protect. Not to be uncharitable, but I refuse to be held hostage by birds in my own yard. After all, this isn't a Hitchcock story.

So first I tried going out and shooing them away. The birds would casually waddle out of range and then return the second I went inside. Next I tried making loud noises. No dice. Then I swished cellophane paper in the air. Same result. We were obviously at war, and the geese were winning.

I consulted the internet for suggestions. Apparently the best method to keep geese away is by using a herding dog such as a Border Collie or Australian Shepherd. I had a talk with Winston and we decided to try the goose herding business. He runs to the end of his lead and the geese stroll away. Since Winston stayed outside longer than I could do, the geese apparently decided to avoid further annoyance by moving into a yard three houses away.

Winston may be smaller than even the tiniest goose, but in my book he's an honorary border collie.

Thanks for the laugh this morning, Pat. Not a funny circumstance for you, but you made it entertaining for the rest of us. :) Winston is a champion! We have a ton of geese here in town and I always feel sorry for them. They literally take up real estate in the grocery store parking lot. They'll stop traffic on main roads when they decide to cross, and I always bite my nails for them---especially when there are babies trailing---worried that someone won't want to wait the five minutes for them to arrive safely to the other side.

Good boy, Winston! You are more than a pretty face. This is a CS story for sure, Pat.

Good job! Get those big mouths in line
Lily & Edward

Goose poop = yuck! Great job Winston getting them to move away. last year we had some little birds move into our tree - it seemed like a hundred of them. they pooped all over our grass and after a wind storm we found naked baby birds dead on the ground. It was awful. I hop we can figure out how to discourage them this year
hugs
Mr Bailey, Hazel & Mabel

Good for you Winston! We have many geese here but live far enough from the various bodies of water that they don't come near the yard. I have seen a few ducks on the street when we've had large puddles of water. No one has nested however.

Good luck keeping them away!

Good for Winston! I was gonna loan you Ryker but looks like Winston has it under control!

Radar and I walk at a park with a big lake, and there are usually lots of Canada Geese. When I walk by myself, the geese don't even bother to look at me. However, with Radar at the end of a leash, straining to get some duck a la orange, and they waddle quickly away.

Maybe you could rent Winston out to your neighbors?

Winston is not only a cutie; he definitely has that can-do attitude. I just hope your neighbors don't get a bigger dog that will shoo the geese back to your yard.

It will be really tough time to have bid feathered bird being disturbed...

Having been attacked by geese after running out of food... I'm terrified of those things! Good for Winston!!!