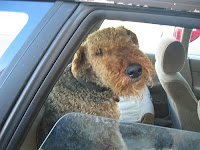 Photo by the wretched


We've been having a run of very hot days with no relief in sight. Given the heat wave, I searched an issue that disturbs me greatly...people who leave their pets in hot cars with the windows cracked. Sure enough, I found a story about a chihuahua in Michigan left in a car a few weeks ago that died of heat stroke. The owner now faces charges of animal abuse. Apparently, people still haven't gotten the message.

The first time I witnessed a dog left in a hot car, I had the store manager page the owner, who came to the car shortly thereafter, arms loaded with grocery bags. I tried to be polite as possible with my comment about how quickly this could have become deadly. The owner looked embarressed, mumbled an apology, and drove away.

The second time I called the police because the car sat in front of a strip mall, and I had no idea where to find the owner. The officer responded and looked up the license plate. Thankfully at that point the owner returned, because the officer was preparing to jimmy open the door in order to rescue the dog. The officer asked me to leave while he had "a talk" with the man.

Even when weather is not so torrid as now, a car with windows cracked can swiftly become a deadly oven. Dogs can only perspire through their paws and mouth. They cannot handle the type of heat created by a car on asphalt with the sun beating down.
United Animal Nations has good information on heat stroke symptoms, emergency treatment, and flyers to hand out for non-life threatening situations. It's aptly titled My Dog is Cool.

I know critters love to go places with their people. But on hot days be kind. Leave them at home in the air conditioning.

And for those people who leave their critters outside, in this weather...PLEASE DON'T!
Posted by Pat Wahler at 7:00 AM

A timely post! Poor Lady is much aggrieved that she is being left at home these days, but it's necessary with the temperatures in the upper 90s and the heat index even higher! Even our afternoon trips to Happy Hour at Sonic are at an end. Though the back of the car is not "killing" hot with the windows rolled down as we sit there, it is uncomfortably warm (sometimes even for me), so we either drive through and come home or don't go at all.

I'm glad you've been able to be a "good samaritan" on these occasions and hope the need doesn't arise again. You're so right that pets belong home--also not outside--in the heat of summer!

My big galoot has had her morning walk and is now stretched out under the ceiling fan here in the study---pure comfort and contentment.

Well done, Pat for making such an important point!

Hi Pat,
Great advice for pet owners or anyone who loves pets.
Donna