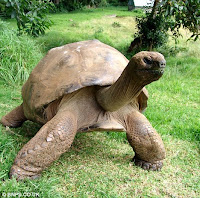 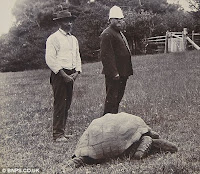 
Remember the tortoise and the hare story? The tortoise quietly and methodically beat out the speedy hare to take the prize, proving that slow and steady wins the race. But perhaps there's something else we can learn from the humble tortoise in addition to his ability to get things done.

According to the Guinness Book of World Records, a tortoise named Tui Malila is the oldest animal that ever lived. Tui died in 1966 at the ripe old age of 189 years. And the oldest animal currently living today is also a tortoise. Jonathan resides in the British colony of St. Helena and is a mere 176 years old. He's still healthy, and by all accounts going strong. Perhaps he'll take Tui's place in the record books someday.

Tortoises are documented to live a long, long time, despite the fact that early record-keeping was often unreliable. Facts were tough to verify because tortoises outlived their human observers!

Anyway, for those of us who wouldn't mind being around for a while, I thought about what lessons critters like Jonathan could teach us. Here's my list:

1. Eat plenty of veggies and fruits.
2. Stay active but don't rush yourself.
3. Live a peaceful life.
4. Take at least one nap a day.
5. Cultivate the ability to feel at home wherever you are.

Here's to longevity!
Posted by Pat Wahler at 7:00 AM

You've hit the nail on the head, Jonathan old boy!

I just recently read an article on another giant tortoise and he had been unfortunate enough to damage his carapace. The ingenious vets had made him a fibreglass patch for his shell to fit over the space and protect him over the protracted period it will take to grow new carapace in its place.