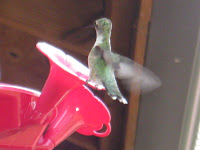 This is a female ruby throated hummingbird at one of our feeders. While the photo's not the greatest (see yesterday's blog), it does demonstrate some pretty heavy activity that's begun in the last few weeks.

In August and September, hummingbirds start a feeding frenzy. They're eating as much as possible to prepare themselves for the winter migration south. Amazingly, these tiny birds, weighing a mere tenth of an ounce, will fly all the way to the Central American area...and then return here in the spring!

This is my favorite time to watch hummers. They become very territorial, guarding feeders, chasing each other, and chattering indignantly to let the world know who's in charge. Sometimes we see dozens of them buzzing around like little jet propelled fighters.

One little guy actually got tangled up in one of our trees. I heard him chattering. He'd try to fly but seemed caught in a branch, actually hanging down from it when he wasn't struggling to get away. It was obvious he wouldn't survive if something wasn't done.

The branch was higher than I could reach with my hand, so I took a mop and pushed up gently against the bird. It dislodged him enough that he could fly away. My husband said the likely culprit was fishing line. Birds like to use it in nests, but they can become entangled. Thank goodness for a happy ending in this case!

If you have feeders it's critically important now to keep them fresh and filled. Those little guys will need a lot of energy for their long journey.

And if they remember your yard as hummer friendly...just like Lassie, they'll come back home!
Posted by Pat Wahler at 7:41 AM

I love hummingbirds! They are so fascinating to watch! Where I lived in Northern BC,there were literally hundreds of them fighting, buzzing and dive bombing the feeders and whoever and whatever was near them. Where I live now, we have some and I never fail to stop and just watch these fascinating birds.

So glad you were able to rescue the little guy!

I envy you the chance to see hummingbirds! I wish they visited the U.K.

Hi Pat,
Our hummingbirds are very territorial. A few bees and wasps have tried to muscle in on the feeder on our porch, and the hummingbirds quickly dispatch the intruders. We've also had a trio of yellow finches show up in our yard yesterday. It's such a lovely time of year for all the critters--including us!
Donna
http://donnasbookpub.blogspot.com