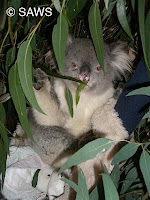 
Some sad news to end the week.

A few months ago I blogged on the story of Sam the Koala, survivor of the Australian wildfires. She became an international sensation when photographed during rescue accepting a drink from the firefighter who rescued her. Though her paws were badly burned, she reached out to hold the firefighter's hand while she drank from the water bottle he held.

She recovered from her injuries, but could not survive the ovarian cysts discovered during exploratory surgery to determine the cause of her severe pain. Because the disease had advanced beyond treatment, she was euthanized yesterday.

Sam brought attention to how not only humans, but wildlife are impacted by devastating natural disasters. Her rescue and the poignant photo brought both Australia and the world hope.

Though Sam is gone, other koalas are still in need of care. Check out Sam's website for more information about what is being done to help them.
Posted by Pat Wahler at 6:51 AM

This is sad news---but the upside is that she was being cared for and did not die a painful death alone in the wild.

I was saddened to read in the papers that Sam had died. That wonderful picture with the firefighter lifted the spirits of everyone in Australia who had been affected by the wildfires.