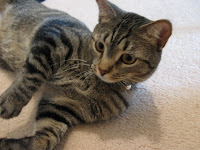 My cat, Bogey, is a purr-er. The second he lands on my lap (whether I want him there or not) the rumble begins. His purr is throaty and rough, a testament to his macho self-image. I've read that purrs resound with 26 cycles per second. That's about the same as an idling diesel engine. Little wonder the sound of a purr is often likened to a feline motor.

Theories abound on why cats purr. We often assume it shows contentment, but cats have been known to purr when threatened, ill, or even when close to death. It's a voluntary response (a.k.a. "I only purr when I want to"), but clearly the purrs have different meanings.

My favorite explanation for why cats purr is one I found on many cat-related websites. Purrs release endorphins. Endorphins make the cat feel good. Hence more purrs. And who can resist petting that purring kitty? Doing so feels pretty good too, doesn't it?

So that must be the answer! Purrs do release endorphins.

And not just for the cat.
Posted by Pat Wahler at 5:00 AM

LOL! I like to think that Barkley purrs too, in his canine way. He certainly has lots to say for himself!

Nothing finer than a purring feline! Unfortunately, my last cat (Fang) would be cuddled up with me purring contentedly and then, without warning, decide to take a bite out of the nearest part of my anatomy! I still bear the scars!