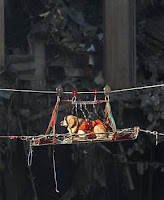 Eight years ago today, the World Trade Center was attacked by terrorists. Many people lost their lives. As the news media replays those images, I can feel the same sense of horror and fear that I experienced then.

Critter Alley pays respect to the thousands who perished as well as to those who risked their own lives to save others that day.

In particular, I'd like to honor the rescue dogs of 9/11, who bravely performed tasks unlike any they'd experienced before.

Although their paws burned as they entered the smoldering debris to search for survivors, they went in. Though their lungs were damaged from breathing the toxic fumes of destruction, they went in. Despite the noise and confusion of utter chaos that must have seemed like the end of the world, they went in. The dogs and their handlers did the job they were trained to do. Because of them, lives were saved. And when it became apparent that that their job would be that of recovery rather than rescue, the teams worked on...and on.

Eight years later, most of these noble animals are gone. Some through age, some through injuries that could not be treated.

So today, please remember them, too.

And what they did.

For more information, read Dog Heroes of September 11th: A Tribute to America's Search and Rescue Dogs by Nona Kilgore Bauer.
Posted by Pat Wahler at 5:00 AM

Thanks Pat for reminding us of the animals that were lost on this day as well. We always remember the human life that was lost but rarely the animals. I will remember!

I am glad to have the opportunity to pay my respects to these brave animals and to remember the work they did in the wake of the tragedy.

Thanks, Pat, for a very touching post and tribute.
Donna

They were heroes, too.