Bogey is an "inside" cat. He is not allowed to go outdoors. Consequently (and because he's a feline, I'm sure) his sole aim in life is to thwart me and get outside.

He lurks at doorways waiting for an opportunity to escape. Often he's successful. Then I chase him around the yards behind the house to recapture my elusive hunter.

I'm sure the sight of me calling (in a much nicer tone than I'm actually feeling) him and following behind my four-footed Houdini as he explores the area, is quite entertaining for the neighbors. You don't need reality television when Bogey's on the prowl!

I'm sure you can imagine the scene. He waits for me to get heart-breakingly close...then runs.

Since his lurking isn't always successful, Bogey taught himself to open our heavy sliding glass door. It only takes about an eighth of an inch opening (easy to happen when you slide the door shut in a hurry, getting a slight "bounce" effect). Then he goes to work, quickly creating enough space to scoot through.

I've documented his technique for your edification. 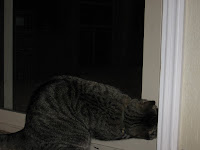 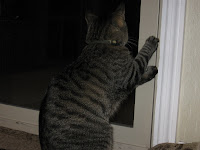 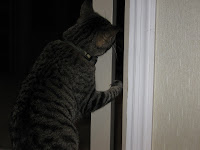 All I can say is, whoever coined the term, "Where there's a will, there's a way", must have owned cats.
Posted by Pat Wahler at 5:00 AM

Bogey, don't you know it's not NICE to thwart the hand that fills your catfood dish?