"Which pressie is my fa-fur-it?" 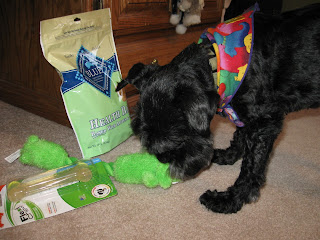 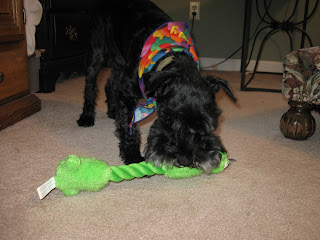 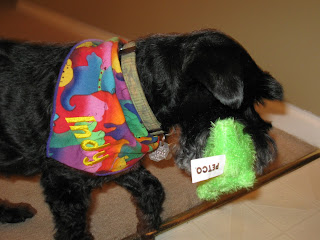 "Thanks for the pressie, Mom!" 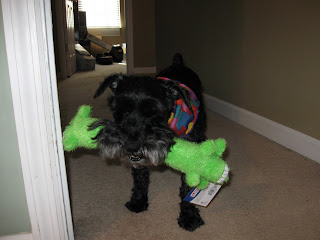 Yesterday was Indy's 11th birthday, and for many reasons, it was quite a milestone.

Only four months ago, his vet gave me a dire diagnosis. After days of vomiting, diahrrea, and major lethargy, she ran tests and then showed me his X-ray. Indy's liver had shrunk to less than half its normal size. He had developed cirrhosis of the liver, more than likely caused by repeated bouts of gastrointestinal problems. She said he could have days, or at best, a couple of months left to live, and even made "final decision" suggestions.

Once I was able to process the message, I decided to get busy and do some research. I found information on care for dogs with liver disease and followed the suggestions. After all, what did we have to lose? Indy went on a strict diet regimen of lean, high quality home cooked food. Only wholesome organic treats were allowed. Daily meds to control vomiting and diahhrea became part of the regimen. We added the supplements Vitamin E and Denosyl daily, along with a multi-vitamin intended for senior dogs.

Things aren't perfect. Indy still has a few vomiting episodes from time to time, and has developed some minor obsessive habits, but for the most part he's doing well. After receiving such a negative prognosis, I wasn't sure he'd even be around for his next birthday. And here we are, celebrating number 11.

I suppose this serves as a lesson. It's a good idea to check into alternative remedies if you have a critter with chronic health problems. Whether a vet or a human doctor, the official medical world doesn't know everything there is to know about healing. It never hurts to look at all the options.

With no guarantees, each extra day is a blessing. Indy seems to be happy and enjoying life.

And that's exactly how I want it to be for my little old guy.

So happy birthday, Indy!!!! Here's hoping we celebrate many more milestones together!
Posted by Pat Wahler at 7:22 PM

We wish Indy a very, very Happy Birthday. Yes, and many, many more!!

Pat - You are a wonderful doggie-mama to make the efforts you are for Indy. I know (though cannot understand) a number of people who feel "it's just a dog" and do not comprehend the bond. Indy is fortunate to have you, and I know you feel equally fortunate to have him in your life. The mutual love and loyalty is a blessing to you both. God bless.

Happy Birthday INDEED! Quite a milestone Indy! Way to go!

I too am worried about my senior dog. She's had diarrhea all week. I've hardly slept at all. I'm making another batch of chicken soup as I type...bleary eyed (fun time to do my taxes, eh>) I keep praying this is not something serious...

Such good news about Indy! I'm going to look up those supplements!

Happy birthday Indy from me and Kelly. Great presents!

You are just adorable! Hope you had the BEST day ever!
xoxo

Happy Birthday Indy! Yeah 11 years old :)
That was very good advise too! I'm thinking organic is the way to go for us humans too! It makes total since.
xxoo
Deborah

She Who Loves Book and Dogs said...

Thanks for visiting us during the blog hop. We returned the follow favor! Happy Birthday Indy! Thanks for finding us and have a great day.

Thank you for visiting and following!

Also, happy birthday to Indy! You've made the right decision to do your best and care for him. I hope you will celebrate his 12th birthday too and many more afterwards.

Yep--ditto what Lisa said. Indy has more gifts than he knows. And happy, happy birthday to your beloved little doggie!

Happy Birthday Indy. Enjoy your presents! What a wonderful story!!

Just found you on the blog hop!

A late happy birthday to Indy and a big hug to a great mom.