Blog the Change for Animals 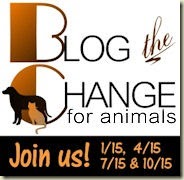 When I decided to participate in Blog the Change for Animals, I really planned on writing an upbeat story about a local shelter.
Then the politicians of the Missouri House and Senate changed my mind.
Last year through the democratic process, an initiative received sufficient signatures to be placed on the ballot for a statewide vote. Proposition B was designed to provide dogs in breeding facilities with humane care and treatment. The voters spoke. The measure passed. And that should end the story.
Instead, certain politicians, led by Senator Mike Parsons, have determined that we common folk are not capable of making a good decision. Therefore﻿ they have defied the will of the people by taking the law as previously passed and literally disemboweling it.
A few examples: The law as passed required a breeder to have no more than 50 (fifty!) breeding animals. This language was removed, allowing breeders to have as many animals as they choose. The law required breeders to give dogs an annual hands-on exam. Now a "visual inspection" is all that's necessary. Other specifics such as food, water, providing adequate space, and the number of times per year an animal can be bred were previously spelled out. Now these things are left up to a veterinarian or to "standards established by the Department of Agriculture".
I wonder if the aforementioned vet approval comes from the same veterinarian doing a hasty "visual exam"? And as for Department of Agriculture standards, we've already seen what that's gotten for Missouri...the title of "The Puppy Mill State".
This measure, SB 113, has passed the House and Senate. Now the only thing keeping it from becoming law is Governor Jay Nixon's signature.
Missouri residents: please consider asking the Governor to veto this bill. He can be contacted at 573-751-3222. Or, an email can be sent via this link.
Public officials need to know that they cannot undo the democratic process for their own agendas.

To the Politicians of Missouri:

The people of Missouri won't forget what you've done. We care about animals...and we vote.
Posted by Pat Wahler at 5:30 AM

Wow! So many are writing about Prop B today...and thank dawgness! I hope everyone writes a letter so they don't veto it. Pets have rights too!
Cairn cuddles, Oz the Terrier

This just frosts me! Our elected officials seem to think that we're smart enough to vote for them, but too dumb to notice what they do afterward. The same thing is happening in Pennsylvania. Thanks for raising awareness of the issue. I'm hoping many Missouri residents contact their legislators!

Thanks for blogging the change!

Amy from
BtC4Animals.com and
GoPetFriendly.com

Thanks for keeping us informed. This is just awful ...

I don't live in Missouri, but I'm appalled at how Big-Ag continues to manipulate their way into changing the voting will of the people. Keep up the good fight and keep us posted.

This whole Prop B thing is unbelievable! We're not in Missouri, but signed letters to the governor that we won't support the state's tourism, etc, as long as they ignore the voters' voice. It's just w-r-o-n-g!!!

Thank you for posting this!!

Wow! Reading things like this make me happy over how our political system is.

Glad to see so many pet bloggers talking about Prop B. We're in Canada, but puppy mills are a global problem.

Several other bloggers I visit are also furious over this political railroad. Kudos for writing about it. I hope the politicians who spearheaded this backtracking are voted out of office come your next election. That seems to be the only thing that makes them listen.

What a horrible situation... makes me angry that Prop B is under such attack.