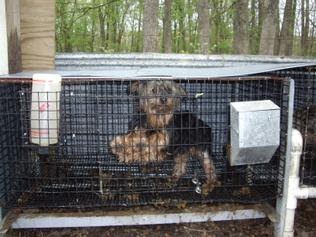 The pressure has been applied and Governor Nixon has responded.

However, rather than vetoing SB 113, the governor claims to have brokered a deal between humane organizations and those who were behind the effort to modify and soften effects of any new regulations as approved by voters.

I haven't seen all the details, but it sounds as though breeders are still getting much of what they wanted. A few modifications regarding space and hands-on veterinary care have been returned to the original legislation. As a result of the changes, the bill must now go back to the legislature for approval.

This doesn't sound like much of a compromise to me. The message still seems very clear.  Missouri will continue to be known as "The Puppy Mill State." Breeders will keep cranking out litter after litter of puppies while politicians beam with self-righteousness over correcting the allegedly misguided attempts of the public to demand real change.

Dogs are the losers in this political deal.

And so are Missouri voters.
Posted by Pat Wahler at 10:10 PM

So sad. So many abused animals. People need to stop creating the market for these dogs. No sales = no money = no mills. They wouldn't continue if there was no profit in it.

If nothing else, perhaps this bill, though inadequate, will be the seed of something better.

Unbelieveable!! May the real LOSER please stand up
Benny & Lily

How sad, but a clear image of our political "mill". Sweep this under the rug and say what a good job they did.....

It would seem that the law should have to take effect,as passed, for at least a year to see how it works before it could be modified.

You said it. I feel so let down by the government. And my life isn't even at stake like all those innocent dogs.

How frustrating. There must be money involved. That seems to be at the forefront when there is abuse involved that no one will do anything about.
Ann