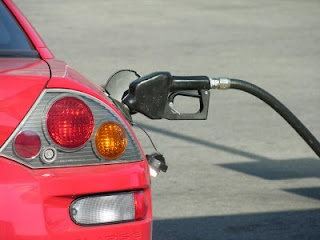 I hate refueling my car. The price of gas is soaring higher than Sputnik, and it's depressing to think about just how much more we may be paying in the future. But I realize gasoline cost is one of those things that can't be changed by me, no matter how much I fret and grumble.

So rather than complaining about the dent in my pocketbook, I've decided to focus on another kind of refueling. It's the type of fuel that charges internal batteries and provides the energy that's necessary to reach a goal.

For dieters, that energy might come from seeing a lower number on the scale. At work, it could be a compliment on a project well done. At home, perhaps a loved one articulates unexpected thanks for an everyday task. Any one of those things can serve to rev up an engine and get things rolling.

Writers need fuel, too. Crafting a story, essay, or article, is gas-guzzling work. And sending that labor of love out into the world for probable rejection is like having an ice pick shoved through the fuel line...or the heart. Sometimes you have to wonder, why am I doing this?

The reality is that rejection is a big part of any writer's life. But experiencing all those lows can make it all the sweeter when someone finally says "yes". Sort of like the way it feels to drive a cherry-red convertible on a brilliant spring day. Though the driver may believe her convertible to be sleek, fast, and a testament to good taste, how fabulous it is when that belief is confirmed by someone else.

Lately it's been way too easy for me to find other things to do than write. And not writing means not submitting...a sure fire way to avoid rejection. Yep, it's been a long time since my little red convertible has gotten much in the way compliments.

But rather than sputtering and coasting to a roadside halt, some good news has finally come my way. It's made the past week a definite refueler for me.

One of my short stories appeared in "The Storyteller".
I've been notified that another short story has been accepted for the Columbia Writer's guild anthology, "Well Versed-Literary Works 2011".
Of the two pieces I submitted to Missouri Writer's Guild contests, one took third place in the flash fiction category and the other was named third honorable mention in the humorous essay category.

Talk about some high octane fuel!

In my current state of delight (and shock), sitting down to write doesn't seem quite as tedious as it did two weeks ago. I'm feeling pretty good. My empty tank is full again and the road ahead is clear.

I suppose you could say that motivation is my green light. Now it's time to step on the gas pedal and see where we go.

What is it that energizes you?
Posted by Pat Wahler at 9:24 PM

Congratulations! Wow! My tanks would be overflowing with that kind of news, too!

Good news and just in time too it seems.

Congratulations! That's wonderful news. Who needs gas? You're on a roll! Keep it going. :)

Congratulations! That's HUGE and so exciting!

Caffeine energizes me - not the right answer I know. I keep trying to find a natural alternative, but haven't found it yet.

Congratulations! Dahling, you're a stah!

What energizes me? Nothing, at the moment. I just want to lie down and sleep for about a year.

CONGRATULATIONS... That is wonderful news.
You know... you can't get any ships in... if you don't send any ships OUT.

One of our writer furends writes Flash fiction too.

Congrats! Nothing like a good ol 'atta girl' to get your face smiling :) Glad you're all fueled up and rearing to go again! (I think I'd rather pay the price of possible rejection than being gouged at the pump!) Write On! :D

NAK and The Residents of The Khottage Now With KhattleDog! said...

Congratulations!! The way your blog started I was afraid you were going to say you wouldn't be posting for a while in order to put more time on your writing.

Glad you are getting some more recognition for you effort and wit.

Congratulations on those great accomplishments!

WTG! Now you can put that pedal to the metal and zoom off!

Woot! Woot! I had heard the MWG news at the conference, but didn't know about the others, so way to go!

Making beads energizes me... but not selling them takes it right back out of me. I longed to be a writer and struggled with it for years after some success in television. In the end... the rejection got me!

Awesome post, Pat! Your writing is always thoughtful, unique, creative, and/or funny...all in one! Congrats on your acceptances and award!! I've had the same problem for way too long...finding other things to do than write. The conference definitely pumped me up, but I also almost need daily reminders, like this wonderful post! Thanks!