Many of you may recall me writing about our friend the sculptor, Don Wiegand. For the past 2 years, Don has been working on a bas relief of Winston Churchill, commissioned by the Churchill Foundation to be placed at Westminster University in Fulton, Missouri.  This is the location where Churchill gave his famous Iron Curtain speech.

We got a call to come and see the piece before it traveled to Fulton.

Time is getting tight, but perfection is Don's motto. 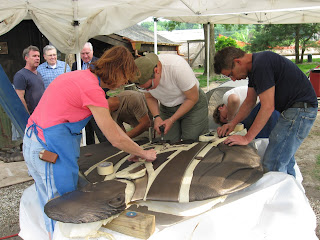 Apparently Sir Winston needed a few touch-ups before making his grand entrance to Fulton.  Here you see him being lovingly buffed and polished before a final sand blast occurs. 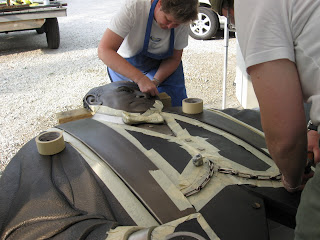 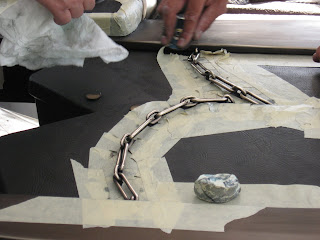 Sir Winston needs a bit more sparkle to his eyes. A light brush of a special artist's compound should do the trick. 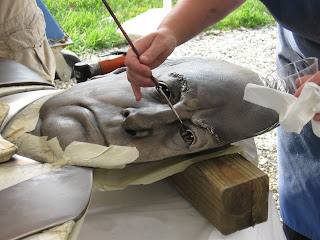 Once the piece is assembled, this will form the top of Churchill's podium. 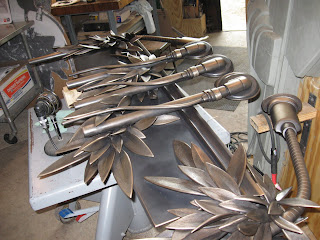 Don chats with another visitor, the Mayor of Chesterfield, Missouri. 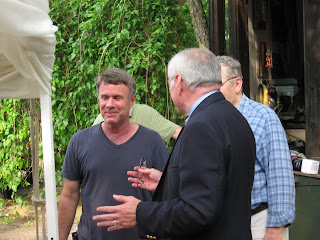 This gentleman is filming the process for a locally produced documentary. 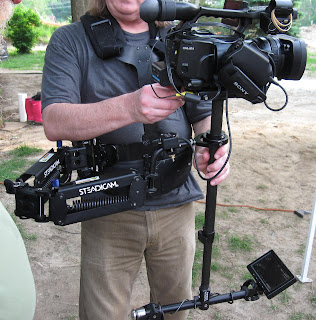 Here's the plan for the finished project at the Winston Churchill Memorial Plaza. A few days after we visited, the heavy bronze pieces were trucked to Fulton and assembled on site. ﻿
Ta-da! The finished product. Congratulations to Don and his hard-working crew. He's produced yet another masterpiece.
Am I ever lucky. I know some of the coolest people!
Posted by Pat Wahler at 5:35 PM

Your friend Don is very talented.

Amazing! what an interesting process!

Gorgeous piece of art. I hope it survived the tornado.

Yay for Don! That is amazing, great to see the steps in the process of displaying, too.

oh, wowsers, is your friend mr. don totally full of the talents or what?!
mr. churchill looks totally awesome!!
it was really cool to see some of the process of finishin' the piece! my most fave part was addin' some more sparkle to his eyes. :)

This is fabulous! Sir Winston was such an articulate speaker. Mommy likes to read his speeches. A wise, wise man.
Your friend Don is an amazing artist. Yup, you know cool peeps!!
Smooches from pooches,
BabyRD & HOotie

What a great artwork and tribute! Very cool!

Amazing. Winston Churchill was born in the same county as I was - Kent.
Ann