When a critter interrupts a major sports event, you have to figure that somebody's going to talk about it. And in the case of the St. Louis Cardinals, you can amend that to a lot of people.

During one of the recent playoff games, both crowd and media were treated to the sight of a squirrel scampering across home plate. And with a Cardinal player in the batting box, too!

Seriously, what are the odds? I mean, you might see such a thing happen at a little league game in a public park, but at Busch Stadium? In front of thousands of people?

After the furry interruption (and a lot of laughter), the Cardinals went on to win the game. This swiftly hatched an idea. The rogue squirrel must have brought the team good luck. And in a whisk of the tail, the intruder was dubbed "The Rally Squirrel".

Without fur-ther delay, more items than a zookeeper can shake a stick at were printed and sold. T-shirts, towels, and other collectibles featuring the image of The Rally Squirrel are now extremely caliente. Vendors can barely keep them in stock. Bringing luck, making money, galvanizing fans...wouldn't you think that squirrel would be a hero?

But in spite of everything, I'm sorry to report that the management at Busch Stadium is not impressed with the new team mascot. They've trapped 4 squirrels so far and relocated them to an area described vaguely as "the country".  Guess they don't think the Cardinals need any more luck.

I've heard that squirrels have a great sense of direction. Can the Rally Squirrel return in time to save the day for the home team? I have my fingers crossed.

And if the Cardinals don't win the World Series, I know who I'm going to blame... 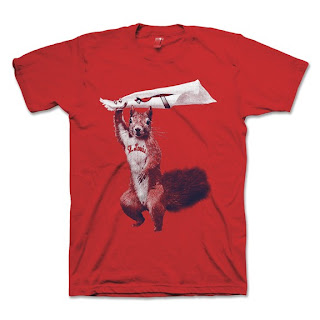 I just don't Know about all of THIS... I mean... we DO KNOW what kind of EVIL Squirrels can Do... What if it was just a TRICK? Maybe they did the right thingy.. haulin them off... I just hope they didn't send them to MY HILL.

they are all evil, cool shirt tho
Benny & Lily

Yay, Rally Squirrel! Go, Redbirds! (unless they play the Tigers in the World Series!)

I like the shirt with the red bird and the red squirrel sitting on the logo bat.

That is so funny. I hadn't heard all that either. Poor squirrel, he was just trying to do his thing.

Nice post! But being a dog -- I would hate see people wearing squirrel t-shirts. I might get confused and start to chase them by mistake. Oh well.

That squirrel is lucky they don't let dogs to go ball games... there would be a posse after him for sure!

I'm thinkin Mom should get one of those T-shirts and wear it when she wants me to chase her ;) Glad the Cardinals are doing well! :)

Really, what are the odds. Something more going on...

I like this t-shirt too. it's very cool! and wanna say thank you for visiting my blog, it's a pleasure to me! :)

It's all About Pet Fences | Dog Fence