A few weeks ago, Bogey had his fifth birthday. He remains as much a pistol as ever (see my story in Chicken Soup: I Can't Believe My Cat Did That-available September, 2012)

I can't ignore the fact that one of his favorite activities (and most annoying habits) is sipping water straight from the faucet. Never mind if you're trying to brush your teeth or wash your face. He'll meow, push up against you, and be a general pest, until you let him slurp from the cool stream.

That's why I figured that his own personal drinking fountain would make The Perfect Gift. He could have flowing water whenever he wants. And I could wash my face in peace.

I placed the order and the mailman delivered a box only two days later (no kidding!) containing The Perfect Gift. I put it together, filled it with water, and plugged it in.

That The Perfect Gift is popular, could be described as an understatement. 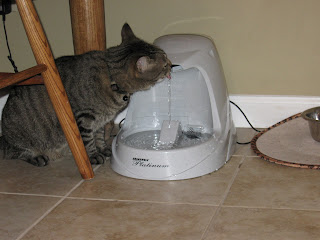 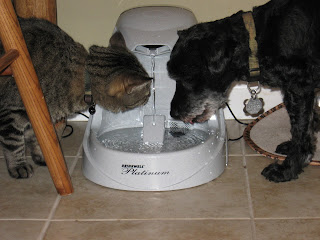 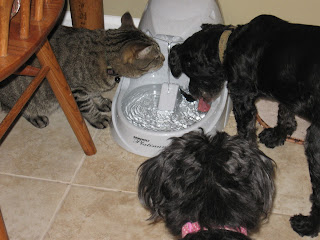 Anyway, I just received The Perfect Gift, too.

A writer friend announced a couple of weeks ago that her story made it into final round for Chicken Soup for the Soul: The Power of Positive, to be released in October, 2012. I had made it through first round for that book, too, but heard nothing about making final round. So I figured I'd be getting the dreaded "Sorry we couldn't use your story" email. I sulked around the house in a most unpositive fashion as I waited for the bad news. But a few days later, lo and behold, I got an acceptance email, too!

I tried to figure out what I'd done differently. Better writing? Kinder editors?

Nope. I think it's because I'm submitting more stories than I've done in the past...at least one story a month to the CS people. The moral to my story is this: keep sending out those submissions if you want to be published. Your persistance will eventually bear fruit.

On the other hand, you could deduce that sending one story a month to CS and having only 3 selected is not a terrific statistic. But who wants to be a Negative Nellie? My batting average may be low, but at least I'm still in the game.

Hi Pat! The Perfect Gift is unbelievable!! I've never seen or heard of it, but it definitely is awesome!! Hurray for you and your four-legged family members...granddogs and all! AND congratulations on your CS acceptances!! Very Exciting news!! THREE CS books in one year?? THAT is quite an accomplishment...in my book! ooooooh, sorry for that pun! :)

Too right no negative thinking.....well done. Keep it up. Wishing you all a good Saturday.
Best wishes Molly

I've never met a cat yet who didn't like to drink from the sink or tub. This is the ideal pet gift. And yes, you are on a roll! Congratulations again and again and again.

Congratulations on being chosen,,,hard work does eventually pay off. As far as the perfect gift...well,,,no matter how much fun it might be,,,nothing is as much fun as aggravating Mommy.

Our pets aren't spoiled...of course not!

Congrats thrice over for your story acceptance! I'd say a 25% acceptance rate is dad-gummed impressive!

Since I'm no longer on FB, I'll toot your horn in a footnote on Monday's blog!

As for Bogey, he just wants to make sure you don't forget who's in charge...

What a fun gift. And wow, three CS in one year? Hot diggity, congratulations!

Your batting average is great! And the furbabies' perfect gift is AWESOME! I'll have to pass this on to a friend. Her cat rolls around on the shower floor after she steps out. I think the cat would shower with her if she let it!