Dance to the Music! 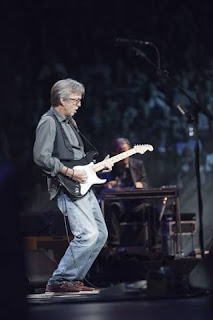 My name is Pat W. and I am an Eric Clapton groupie. He's the utmost in musical cool.

Some of you may remember that Hubby and I drove to Nashville in March to see my idol, Eric, in concert. Getting him to St. Louis apparently wasn't going to happen, so if the mountain won't come to Mohammed...well, you know how the saying goes.

A master guitar player and Blues man, EC has more awesomeness in one hand than 47 other musicians put together. Needless to say I soaked up more than my fair share of Eric at that concert...even got in trouble for activating the flashlight app on my phone at the end of the final set. (What can I say, I don't carry a lighter)

It would have been a true triumph if I'd also been able to attend his Crossroads concert at Madison Square Garden in April. EC only does Crossroads once every three years (a fundraiser for Crossroads in Antigua, a drug treatment facility founded by EC). He fills the musical line-up with every fabulous Blues player out there (not to mention high profile reps from other music genres). But it would have taken a King's ransom to go and I haven't hit the lottery jackpot yet.

Anyway, highlights from 2013 Crossroads concert were released to select movie theaters for a one-night-only showing on Tuesday at 7pm.

Guess who got to go?

Me, of course! The theater was probably only about a third full, but I had to laugh. Most of us looked like Woodstock, the sequel...only 44 years later. We were all chubbier, more gray, but still ready to get our groove on. Heads bobbed in unison as we moved to the music in the comfort of our cushy theater seats. That's the senior citizen way of attending a concert.

You know, there's nothing like great tunes to turn back time and make you feel like you're sixteen again. And it's a feeling that lasts straight through until the show's over. Then one thing brings you back to the stunning reality of today...standing up. Ouch, my aching back!

I know. When you have to try several times to straighten up after sitting for a while, you don't feel like you're 16 anymore.

The thing I love about Clapton--along with his wicked guitar skills--is his style. He could do concerts when he's 90. I often compared him to Mick Jagger, saying that the Rolling Stones wouldn't be able to do tours once they hit their senior years, that they wouldn't be able to jump around...but they have so far.

Layla (and not the acoustic version) is one of my favorites. I'm glad you got to see him recently...

I love EC too! Didn't know about the movie though! Very cool!

Peace to you too. So glad you had a great time. We had a Bowie one here but it was all sold out at our local cinema. We can well imagine the scene was the same. Have a fabulous Friday.
Best wishes Molly

How exciting. You've got me wondering where the movie theater was. My grandson and I went to a movie theater on Monday and there was a red carpet getting ready for a movie showing there.

Hey Pat! I love Clapton, too! I'm so happy you were able to see him in Nashville. What theater had the movie??

Eric Clapton is awesome. Glad you had a great time. I've never seen him live, but I'd sure like to.