Over the past weekend, an annual event called Fetes de Petites Cotes, or Festival of the Little Hills, was held in St. Charles, Missouri. It's a sort of craft vendor, food booth, entertainment extravaganza that goes on Friday through Sunday, always in mid-August. Tens of thousands troop to downtown St. Charles to buy cute little doo-dads and stuff themselves on kettle corn and every other type of fried, baked, or frozen food imaginable.

I visited on Saturday. The weather couldn't have been more perfect. Instead of the typical 100+ degrees with humidity like a sauna, temps were in the low 80's and felt like fall. Thus the anticipated huge crowd grew to gargantuan proportions. Many things (such as the frozen wine booth owner merrily giving away free samples to anyone who put out a hand) were impossible to get near.

Along with shoulder to shoulder people, dogs were everywhere. I'll bet 1 out of 10 people had a dog on a leash. Of course, I liked that better than the 3 out of 10 people who brought a stroller the size of a mini-van. It's awfully hard to squeeze around one of those contraptions. Like there wasn't enough already to keep me away from the frozen wine booth. Ugh.

Anyway, I grumbled and shuffled around looking for something to catch my eye, when I suddenly saw it. 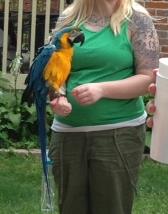 This lady and her pet macaw drew a lot of attention. According to one of the Main Street shop owners, she and the bird spend time hanging out in the area nearly every day. The beautiful macaw appeared to be completely unruffled by tons of people, pointing fingers, and gushing comments. He was one cool customer.

It made me stop and think. If Mr. Macaw can take this mass of human craziness in stride, why can't I? So I decided to release my inner crabbiness like a child's helium balloon into the blue summer sky, count to ten, and watch it float away.

I slowed down my pace and stopped trying to dodge around people. When the foot traffic became a traffic jam, I smiled at those around me. They smiled back. It felt pretty good.

Wise words as usually after you get there you want to leave because of all the pushing and shoving. We should take a leaf out of your book. Have a wonderful Wednesday.
Best wishes Molly

Pat--There are so many things we get all revved up about--things that are totally out of our control and are really unimportant.

Perhaps I should think of that macaw the next time I feel my blood pressure go up...

Cool bird! And I like your description of the minivan sized strollers. LOL

Yep, don't sweat the small stuff. I spent a lifetime doing that, and now that I'm retired, I just sort of let things slide off my back. I wish I'd done that earlier in life! Sounds like a fun day. Check out Scott, AR online--know it's too far to come, but I'm getting my first taste of the day on October 5. You might file the info for future reference.

THAT is just super.

You know... that's a really interesting take. I hate crowds and panic starts to set in. (Don't even get me started on the strollers and the entitled parents! )

But one of my favorite photos of myself (I ran across it while taking apart my late sister's photo albums) was taken in Hawaii. I had EIGHT macaws hanging from my body and sitting on my head. They WERE such cool and calm birds.

I think I'm going to remind myself to be more like a macaw when in a crowd!

I just love craft festivls...I pick up so many creative ideas!

Several heads, including my own, turned when she walked by.

We went to the festival on Sunday, so it was hotter but we still had fun watching all the people and the dogs. When we were in Gatlinburg a few weeks ago, many people put their dogs in pet strollers. I had not seen those before.