Bogey has many talents.

He has the dexterity of a cat burglar and is able to open nearly any cabinet, drawer, or door. Why just yesterday, Hubby caught him standing on the counter-top microwave using his front paws to push the freezer door handle. Yep. He got it open. And here I only thought we had to worry about him getting into what's in the refrigerator.

Bogey is also a daredevil stunt performer, perfecting jumps, balancing acts, and skywalks that would put the Flying Wallendas to shame. And he doesn't work with a safety net, either. One of his favorite tricks is to leap from the toilet tank to the top of the shower rail. This allows him to easily snoopervise showers, bathroom cleaning, and hair drying.

Last weekend he stood on the shower railing and then jumped to the floor of the bathtub. He sat down in the tub and stared at me (through the frosted glass shower doors), waiting for me to open them. I decided not to obey him and see what happened. 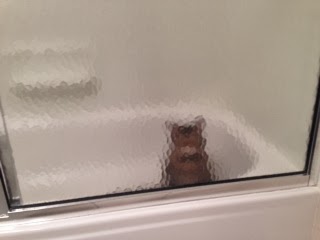 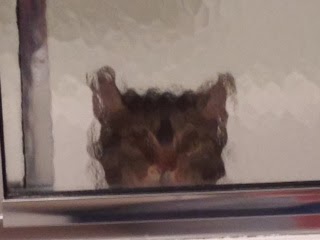 I watched him and he watched me with an expression that revealed nothing. We both waited. I wondered which one of us would give in first as a thin sheen of perspiration formed on my face. Perhaps I had misjudged him. Maybe Bogey really was trapped. Maybe he needed me to open that door. But then the phone rang. I ran from the bathroom to pick it up.

Immediately, I could hear the sounds of paws banging against the shower door. No less than 10 seconds later, my tiger-striped cat zipped past me down the stairs.

I think Bogey has added a new dimension to his repertoire.

A talent for poker playing.

Our Baggy use to do things like that. We never had that kind of shower doors, this is great! Love it!

Send me instructions on how to do those things
Lily

You have one super smart cat.

Pat--I had a cat who used to love taking a bath with me. He'd climb onto my stomach and perch there while I soaked. (Thank goodness I have such a "roomy" belly--there was plenty of space for him.)

Bogey is quite the daredevil. There is no shortage of things to write about with him around... ;)

Oh my gosh, Pat! This is hilarious!! I love your writing, and the sharing of the photos is a wonderful bonus! I laughed out loud seeing Bogey looking through the frosted doors! He's amazingly talented, that's for sure. It took me just a couple of seconds to "get" what you meant by his new talent! Very clever!

OMG! I can't stop laughing! What a character!

Bogey could teach Dora The Explorer a thing or too and no safety net LOL. Have a tremendous Thursday.
Best wishes Molly

Oh my goodness, he is a riot. Thats what I love about cats...always full of surprises!!! They amaze me :)

He is porbably working on his next door opening strategy to get into the oven for the steak!
Lynne x

I had a cat like that once. He chewed his way through the back door. He could open any drawer or door also. Eerie, if you ask me. Talented if you ask them :)

I hope he knows where the cooking instructions are located so he doesn't burn his frozen dinners in the microwave. Your pictures made me giggle, as did your description. He really is a character, and I'm so glad you share him with the world!

Bogey would be a great companion for our Luna, who also defies the laws of physics. Cats are amazing! I love the photos you shared, especially the more close-up shot. What a cool cat!

We just got around to reading this post. That cat jumped into the tub willingly -- thankfully you didn't give him a bath.