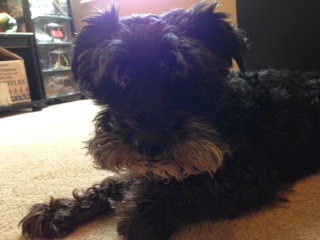 Here's my handsome Indy boy. Isn't he a sweetheart? When I walk from room to room, he gets up (slowly, thanks to his arthritis) and pads patiently along behind me. If I sit down, he's in my lap. If I work at the computer he positions himself beneath the desk. Indy has always been my little shadow.

As you can see, he's long overdue for a haircut. I planned to take him on Saturday, but he wasn't feeling well. Now that he's achieved the vast age of 14, I don't like to stress him out. If his fur is long and he smells a little "doggie", oh well. We can live with it.

Indy has slowed down a lot in recent months. He's lost even more of his ability to see and hear. He's thinner than he used to be and sleeps most of the time. It's becoming clear we're approaching our final journey, though I try not to dwell on it. As long as he's happy, eats and drinks, and doesn't appear to be in pain, we're good. And I hope we'll be good for a long while yet to come.

It's tough watching our four-leggers get old, isn't it?
Posted by Pat Wahler at 6:34 PM

It is. But there's a special depth to "love that well, which you must leave ere long". Sometimes I miss my rambunctious, active boy, but the incredibly sweet old fellow he's become has me wrapped around his paw, too.

We like the long hair look on u, Indy. We love to be our Mommys shadow around the house too. You arent getting old- you are just getting wiser.

It is such a bittersweet journey at this stage, isn't it? I hope you are enormously proud of - and eventually comforted by - the knowledge that your little shadow has had such a long and happy go of it. I remember years ago when he wasn't expected to live much longer. And now look at him looking so perky and happy! Best to you all.

Oh my, yes it is hard to watch, but I agree. If he gets more pleasure than pain every day, he's got a lot of love left to give and life yet to live.

Gosh it is hard and it's part of the reason I thought long and hard about getting another dog. I hate the grief of losing them. Rubie is now 4 and is therefore young and energetic - she is not affectionate and "paws on" like Indy - I regularly have to find her and check she is still on the premises!! Indy is now a "grandpa" in our terms.... and just means life is more chilled. I hope he continues to live his life as comfortably as possible. I know his family offer the best love and comfort possible. He's still gorgeous.

Oh, Pat, it is. It really is. But what a special gift. Our fur-babies give us so much for the time they have, and all we can do to pay them back is love them through all their stages. Indy's a lucky boy, to be so loved. I'm sure he knows it.

I read something--you've probably read it too, Pat--that talks about why dogs and cats don't have to be on this earth as long as people. It's because they show love right away--they don't have to hang around for decades and decades until they get it right.

I hope you have some more good years with Indy. Sleeping most of the day and getting attention and love from you--it sounds like a great life to me.

I forget that our cat is over 10 years old because he still acts so playful and has so much energy, but I'm noticing my daughter's dog, Computer, who is starting to gray and oh gosh, she is going to be so sad when he moves to another life. Your Inndy looks so sweet, I hope you have many years yet... he beat the odds before.

SO HARD! So very hard!

I agree - he's a cutie. My one remaining dog has lost a lot of weight and has trouble getting up, but he is now 15 and he's a large dog (I was told he wouldn't live longer than 8 years). I'm fortunate we found each other.
Ann

He is a sweet little shadow, Pat, and I hope you will have Indy for a long time to come. And I love the long-haired look!

Awww little Indie is still so sweet. Our mama says slow is good, since she isn't getting any younger either.
Smooches from pooches,
BabyRD & Hootie

Age is certainly not kind to anyone, but all we can do is love well.

It is so hard to see them grow old. Our first dog Tramp was a puppy when we got him, and he grew up with our kids. By the time the kids were ready to strike out on their own, Tramp was an old man at the end of his days. That was tough. Since then, we've adopted seniors nobody else wanted, and that's tough, too. Besides the heavy vet bills, we know our time with each pet will be relatively short. Right now, we have Georgia, and we have no idea how old she is - but we keep hoping she'll be around for a while yet!