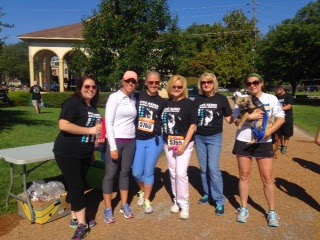 My daughter organized a group to participate in "Trails for Tails", a fundraising event for Five Acres Animal Shelter. Her intrepid team is pictured above. She turned it into a true family affair by recruiting me, her sister-in-law (my daughter-in-law), and my sister. Can you guess who's who?*

Prior to leaving for Trails, we had a serious talk with Daughter's step-son who plays competitive hockey and is also a huge Blues fan.

Daughter: "You ought to come along in case Dave Backes (captain of the St Louis Blues hockey team and board member of Five Acres Animal Shelter) is there."

Since he's nearly 13, he blew us off with a blithe, "Backes won't be there, he's busy with hockey stuff" reply. His eyes never once left the hockey video game he was playing. Oh well...

Anyway, we were lucky enough to have perfect weather for the 3 mile walk. I'd say several hundred people (and almost as many pets) attended. 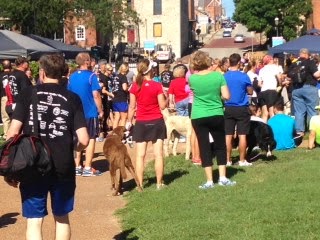 At 9 a.m. sharp we were off and walking. Although we had runners on our team, they took pity on the rest of us and walked, too. Otherwise they'd have left us behind in their dust. 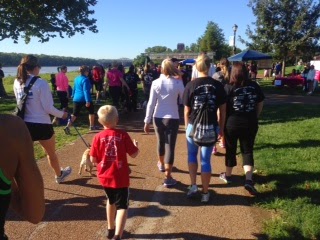 Just after we crossed the finish line, guess what? Daughter spied a special someone and snagged a picture to seal the deal.

Yep, it was HIM! She texted the photo to a certain young man who quickly regretted not listening to the ladies. Luckily, Daughter had enough empathy to refrain from saying, "I told you so!"

What a perfect day and great fun raising much-needed money for my favorite animal shelter.

*Pictured from left to right in team picture: two of Daughter's best buddies, Daughter, my sister, me, and my daughter-in-law. Daughter-in-law is holding her pup, Brady.
Posted by Pat Wahler at 8:43 PM

You are a good looking team for sure! (And I bet your daughter just gained quite a few mom-points, both for that picture and for being so smart.)

What fun. We did a 5K with one of our local shelters a few years ago. I loved that people brought their dogs with them.
Ann

Pat--I went to several events where Kelly and David Backes were in attendance. In fact, David Backes once donated a signed jersey to our rescue group so we could raffle it off. They are wonderful members of the dog rescue community, and David is one of the best-looking hockey players I've ever seen. (His wife is cute as a button, too.)

I'm glad you had such perfect weather, and had fun.

Great event and what a bonus. Have a marvellous Monday.
Best wishes Molly

How fun and what a thrill for your grandson. Great looking team for a great cause.

Worthwhile event with the added perk! And no "I told you so" was necessary as the picture said it all. Wonderful way to spend the day.

Sounds like a great event and I'm sure was a lot of fun.

What a wonderful day and event. You all look lovely!