How Do You Furminate a Cat? 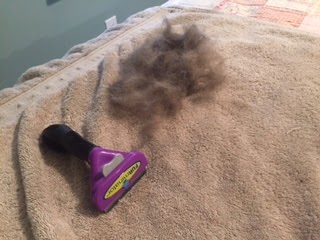 Bogey has been furminated. Well, at least as much as he'd let me.That nice little pile of fur used to be on his back and belly. If I could only have kept grooming him longer, I'll bet I could have collected enough hair to build another cat. But once my efforts bring on a biting and scratching display, it's time to give up. At least for now.

In the areas where he let me work on him, the Furminator did it's job well. I ruffled my hand over his fur afterward and barely even a hair came out. If I had scrubbed his fur like that before, the air would be filled with floating puffs of fluff which would then glue itself permanently to my clothes. Not pretty. Not pretty at all.

This handy little tool is one awe-inspiring invention. Due to it's mystical and magical powers, I am officially in love with the Furminator. All I need to do is convince Bogey.

There has to be an efficient way to furminate a cat. Any suggestions on how to do it without losing a few fingers in the process?
Posted by Pat Wahler at 6:36 PM

Give the kitty laughing gas and THEN furminate?

Put Felix the Cat on the televison and THEN furminate?

Smear a bunch of high-quality tuna all over Bogey's face and THEN furminate?

Furminations is an abomination LOL but she insists. Have a terrific Tuesday.
Best wishes Molly

I've never heard of one of those before. I can practically see Dip savaging my hand like a piranha if I tried that on her :)
Lynne x

Wow, I am very impressed! The fulminator has been permanently retired at our house...it is a hated device. A regular hair brush is acceptable!

At first I thought you wrote FUMIGATED, and all I could think was SKUNK. Our cat likes to be furminated so much he slobbers!

My Saku will not permit the furminator anywhere near him. Sami and Sasha come running whenever I pull it out.

I like my fingers and prefer not to suffer catastrophic (pun wasn't intended but it works) blood loss so I let Saku have his way. I figure 2 out of 3 ain't bad.

Smeagol loves to be brushed and so does my daughter's cat, Kitty. So that tool looks like it'd be handy. Also, loved the new tree you got for Bogey. I'm too cheap to get one for Smeagol!

My cats aren't crazy about being brushed (combed?) so we don't do it very often. The dogs require it, and were, in fact, Furminated today! They seem to enjoy it. I think the cats just like to be contrary. :)

Not a clue...but I'm a huge Furminator fan

Possibly Furminate a cat the same way you herd them.

Patience and time are key, as is him learning to enjoy grooming time. Spend a little time each day ie: 10-15 min. grooming him and while doing so speak and praise him often in a soothing voice. If he likes a certain treat, give him a bit after each session so he begins to associate his grooming, use of the Furminator with something pleasant, good. As time goes on then you can slowly introduce furminating in a new area of the body, not forcing it on him. If he resists at first then move on to another area and then introduce it again the next day, & next, etc.
In time most cats will overcome any fear as they learn to trust that this is a good thing and you are doing it out of love and affection. Good luck!
Note: if a cat reacts in pain in a certain area never force grooming there for certain spots may be tender on a cat due to an injury or abuse suffered before you adopted them. Most cats do not enjoy or allow belly grooming whether they have a sensitive spot or not, so don't obsess on it. The majority of fur shed is in other areas anyway.

I keep hearing such wonderful things about the Furminator that I'm going to have to go look up exactly what it does. I used to see one on TV that looked like it vacuumed. Maybe tell Bogey it could be a lot worse. At least I'm not seeing any hose attachments.