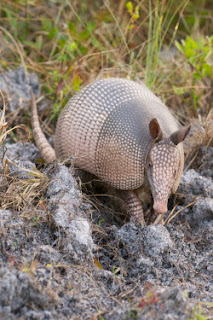 In the eastern central part of Missouri where I live, we seldom see armadillos. They're southern critters, native to areas where it's hot and steamy. However, armadillos are apparently expanding their territory. I can verify this as I've seen one not very far from where I live. Most of the time, armadillos in these parts are only spotted by the side of the road. They tend to fall victim to unfortunate encounters with cars. Apparently when they're startled, armadillos jump straight up in the air. This is not a good traffic tactic.

In any event, these almost prehistoric looking animals, are definitely coming our way. I filed away this fact as no more than an interesting observation, until I read a story recently on Facebook. I couldn't believe what I saw and fact-checked, only to find out it's all too true.

Armadillos carry leprosy. That's right, leprosy. When's the last time leprosy crossed your mind? I honestly hadn't even thought about it since my Sunday School days. Or around Easter when I indulge in my annual viewing of the musical, "Jesus Christ Superstar".

It seems Florida has seen a spike in leprosy cases. And each case diagnosed this year occurred after a person had contact with an armadillo. Holy zoonotic diseases!

Since they're obviously coming our way, here's my public service announcement to you. Don't touch armadillos. Don't try to trap armadillos (they spit). And definitely, don't eat armadillos. I don't care if they do taste like pork.

That is all. You're welcome.

Thanks fur the info! Spitting armadillos!

I've never seen an armadillo, let alone come close to touch one. But I will tuck this nugget of information away. Leprosy, good heavens!

That is amazing having Armadillos living near you! They are such fascinating creatures. Bloody hell, do they really carry leprosy? That is pretty scary isn't it.
Lynne x

I hadn't heard of them carrying leprosy. I've only once seen a live one rustling through leaves on a walking/bike trail here in Texas. Most of the time they stay away from people, but unfortunately as you said, have some bad experiences with car tires.
Ann

Well there go my dinner plans. Seriously, though, I've been fascinated with these since I encountered one up close when I lived in Savannah, Georgia years ago and recently saw my first 'dillo carcass in St. Louis. Leprosy? I will definitely remember not to get close to one again!

Wow. Well...gak! I know we have armadillos here in GA, though they used to be more common in the southern part of the state. I've actually only ever seen one once where we live, 30 miles north of Atlanta. When we lived in TX I spotted them all the time. Had no clue about the leprosy. Interesting. And do people really eat them?

Leprosy? Yikes! That's back from the Ben Hur days. I learned that, and I learned what they do when they're startled--both tidbits from you. Thanks, Pat.

Didn't know that about armadillos. And oh, I still hand-write letters? Congrats on your daughter and son-in-laws future move! And your retirement!