Dogs Who Love to Float 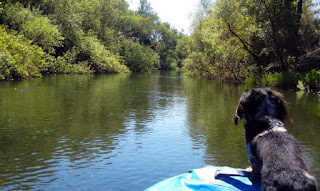 There's nothing like a beautiful day on the river...especially if you're a dog. We just returned from a float trip down the crystal clear White River in southern Missouri. I could not believe the number of dogs in attendance.

We saw a 10 week old Portuguese Water Dog on her very first float trip. That little fur ball pawed at the water and paddled her way from person to person like a champ.

There was a mixed breed hound dog who, after becoming bored from a sand bar stop, jumped back in the canoe and barked at her human companion as though to say, "Okay, now put down that beer and let's get paddling!"

My favorite, though, was a Great Pyrenees who sat tall and majestic in the front of a canoe, calmly watching the scenery go by. He/she (not sure which) could have been a model for how Lewis and Clark's famous dog, Seaman, must have looked while they were on expedition. Totally awesome.

Along the 7 mile float, there were three springs that fed the river. At one of the springs, cold water poured in giving an air-conditioned feeling to the atmosphere. The temperature near the spring must have dropped by at least fifteen degrees...a most refreshing circumstance on a 90+ degree day.

I'd forgotten how much fun it is to float. Especially when you're paddling down a gorgeous river on a beautiful day, meeting lots of new friends...with both two feet and four.

Can we go again next weekend?
Posted by Pat Wahler at 9:28 PM

Pat--It sounds like you had a wonderful time. Our pup cries if he hears the hose being turned on and he's stuck inside, because he wants to play in the water and get muddy. I can't imagine how crazy he'd be in a river or a lake.

We enjoy a relaxing canoe ride down the river too. So glad you had a great time.

Oh, that sounds so nice!
Dogs seem to either hate or love water.
Lynne x

Sounds like so much fun! We have two Lab mixes who, though they love going out on the boat, aren't too crazy about swimming in the lake. My daughter's mini doxie loves the water. He dives in after tennis balls and comes up with the prize every time. :)

I've never floated or even boated down a river (lakes yes, rivers no). It sounds like a wonderful way to spend a day. Fresh air, water and beautiful scenery.

Many years ago I was given a Giant Pyrenes cross. Lido was a beautiful dog but really goofy so his nickname Goof stuck. He loved the water too, but chasing squirrels was his favorite pastime.

Sounds like a great time, Pat. So glad the two- and the four-legged critters all had fun!