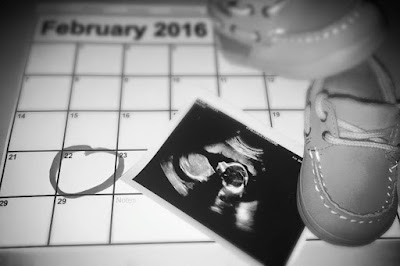 It's finally happening. Our daughter and son-in-law are expecting a new arrival on February 22.
We got the news via a card on Father's Day. But along with the card came a stern request.

"Don't tell ANYBODY until we say it's okay."

Do you know how hard it is not to say anything to anyone when you're bursting to talk? I did a pretty good job keeping my lip buttoned for a few weeks. Then I caved and told two of my gal pals. Of course they were given the same admonition..."Don't tell anyone!" Both of them were far more reliable than me and didn't say a word.

Once we finally were allowed to spill the beans, we did. Yet we were asked not to put anything on social media. Last Thursday, Daughter and SIL made the official announcement on Facebook and now I'm free to blab as much as I want.

To say I'm excited is an understatement. I've looked at baby ultrasounds, helped with the registry at Babies 'R Us, and stared at the most darling outfits I've ever seen. What a wonderful time to be retired! I'll get to help out baby and new mom as much as they need.

There's only one teeny, tiny issue. The baby's gender will remain a mystery to all (except the ultrasound technician) until he/she is born. Yep, the "reveal" will be when Baby arrives. If I only had that technician's phone number. Along with the means to successfully bribe her.

Only slightly more than 4 months to wait until we meet our new grand-baby. Will our little darling be a she or a he? We'll find out in February!
Posted by Pat Wahler at 7:52 PM

Pat--We decided--with both kids--to not find out the gender. There are few real surprises in life, especially once you're an adult. A baby's gender is one of them.

Congratulations. Being a grammy/grandma/mawmaw/G--whatever name you choose--is the best thing in the world. When the baby is older (than an infant), here is a phrase you need to learn:

"Ice cream for breakfast? Certainly. At Grandma's house, that is perfectly okay." (Just kidding. A little.)

Congratulations on this big news! How exciting for your family.

Pat, I know you are excited and can't wait. Our baby's are the cupcakes in our life, and their babies are the frosting. So happy for you and your daughter and SIL. That was long time to hold that secret.

Ohhh, congratulations Pat!
That must be so exciting, what are you going to be called, I love to hear grandmother's different names.
Lynne x

Congratulations! oh the suspense, but it is great to be surprised!
hugs
Mr Bailey, Hazel & Mabel

Congratulations! I can't imagine how you kept it a secret for so long.

I wish your daughter good health throughout her pregnancy.

I'm so flippin' envious! And also thrilled for you! What wonderful news going into the holidays. I'm glad you were finally about to share the news so we can all be excited for you. Virtual hugs to you!

We didn't want to know the gender of our babies either. It was a delightful surprise each time. :)

At least you're spared the torture of keeping silent about the gender. Congratulations to all of you!

I'm so happy for you! Congratulations. I was so excited to comment, now I have to go back and read the rest of the blogs I've missed. Can't wait to know, as I know you are too!

I don't know how I missed this post, Pat, but I'm SO happy for you! You will love being a grandparent. And yes, I know how tough that can be when they say, "Here's the news, but you can't breathe a word." All of my kids did that to me -- eek! Congratulations!

A little girl I helped raise is expecting and this is the closest to a Grandma I will ever be. We await our precious baby girl in March!!