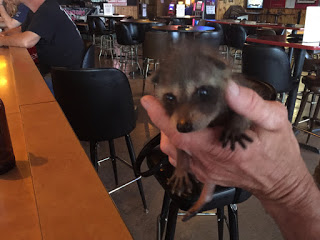 Last June I met an adorable little orphaned raccoon. Some of you may recall my post on this masked sweetie.

Well, over the weekend I attended a spectacular bonfire and feast. Can you imagine who showed up? I promise there hasn't been a more popular guest at any party since Cinderella arrived at the ball. 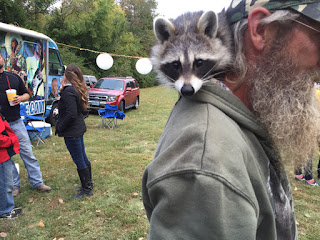 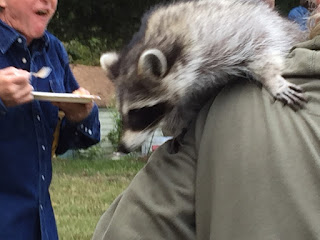 Slim stole the show. He's now five months old and curious as a cat. I'm pretty sure more photos and videos were taken yesterday than would have been shot if Madonna appeared in her metallic bra.

A little spooked by all the fanfare, Slim scooted up the tallest tree to observe the star-struck crowd. He refused to come back down, despite increasingly frantic calls from his foster "Dad". It took more than 3 hours before Slim finally decided to descend. "Dad" took the unruly adolescent home where he presumably was grounded.

There will soon come a time when Slim will hear the call of the wild, and leave home to find a wife and start a family of his own. I think his "Dad" is going to have a tough time letting him go.

With plenty of food, a warm drink, and wonderful friends, who could ask for more on a crisp October night? 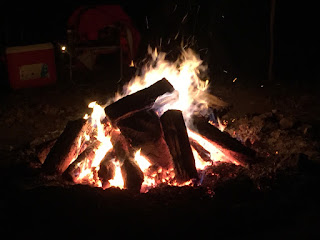 Pat--You answered my question at the end of your post, because I loved the memoir "Rascal" as a kid, about an abandoned baby raccoon that is raised and then released. Slim is lucky to have a foster dad, and was lucky to be the star of the party.

Thanks for updating us on Slim's life. (I imagine his dad--if he's a writer--will have lots of stories to tell.)

Hope Slim's return to his natural home goes well. He sure is cute!

Pat, Slim sounds like he could be the main character in a children's story. How fun it must have been to be reunited.

Slim sounds like a character. And it sounds like a good time was had by all, even if the little guy did opt to run off for a time. Glad he came back safe and sound...and that bonfire has me thinking fall sweaters and warm cider. :)

Slim is adorable. And ah, yes... they do grow up and leave home, don't they? Sounds like a wonderful day for everyone. I love crisp October!

Awww! Glad to read the update. I'm sure Slim's foster dad is proud.

Sounds like you had a good time as did Slim! Also, love the trees in your yard! And what a lovely event for the rescue pups!