My son's dog, Brady, spends about three days a week at our house while his dad and mom are out of town for work.

Brady is a somewhat high maintenance kind of guy. He has terrible skin allergies that literally leave his sides and front feet bare due to him licking and pulling in an effort to make the itching stop. This condition is worse during spring and fall because grass and pollen are two of the biggest triggers.

Imagine having a dog who is allergic to grass.

I can tell you that Son has probably built a new wing at the vet's office due to all Brady's appointments and medications. Brady has even seen a doggy dermatologist several times for help. When a pet has medical issues, a pocketbook can be quickly depleted. I think Brady is a very lucky dog that his parents are so conscientious.

But I digress. Brady has another problem which is not very endearing.

He likes to mark his territory. All. Over. My. House.

I used to put down towels in his favorite spots which seemed to deter him. Then I realized my floors had virtually disappeared under terrycloth. Plus I had nothing to use after a shower.

Then I discovered doggy diapers. These are nifty little belly bands that fasten on with velcro. It seemed the perfect solution until I realized Brady doesn't have hips. Therefore, the diapers would slide right off him.

More research and I found another solution...doggy suspenders. Hey, they work. And I think it gives him some Fred Astaire flair, too. 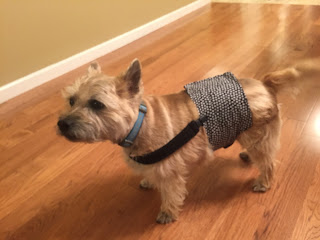 Oh Brady, I have grass allergies too! It is terrible but the vet gave me Apoquel to stop the itching and it has worked! You look dapper in your suspenders.

Omg! I know it's not funny...but it sorta is! He is adorable! What a fantastic fix!

The style is chic, but since I am a licensed dog psychotherapist, I can tell by simply looking at the photograph that Brady is in distress.

Brady IS a dog who's always into being in-style, and so he's worried that his diaper and suspender will not always match. Also, his ensemble should vary. It looks like one in the photo is a gray and black combo? Some events that Brady attends are more casual. Such somber tones wouldn't do if Brady is heading to a meeting at a coffeehouse.

Please consult Brady's social calendar, and make sure you invest in a variety of colors of diapers and suspenders. (Brady would look sharp with a splash of burgundy, I believe.)

He looks debonair. Our cat has been neutered but thinks he's spraying marking his territory wherever we are.0