Could an Apple a Day Keep the Vet Away?


This morning, a friend asked me if I watch any of the veterinary shows currently on television.

I told her no, because my house is a veterinary show.

There's my son's dog, Brady, who's at my house about half the time. Between his plethora of medications for severe skin allergies and the diaper I have to keep on him to prevent his teeny little marking habit, I might as well be a vet tech.

And now I have Winston. When I brought home an adorable little ten-week-old bundle of fur, I never dreamed about the possibility of mortgaging the house to pay for vet bills.

So far I've spent hundreds on x-rays, ultrasounds, and consultations with an orthopedic veterinary surgeon to figure out why he developed a small limp.

Winston has now been diagnosed with elbow incongruency and premature closure of ulnar physis. In short, he's got rotten knees. And not one rotten knee, mind you. Two of them. One is just a whole lot worse than the other.

The specialist gave me the bad news via phone. He's thinking Winston will need multiple surgeries to "fix" his problems. Of course after surgery, I must keep him perfectly still for 6-8 weeks. Did I mention he's a 7 month old puppy?

We meet to discuss the frightening details next week, and it's a sure bet the cost is going to be astronomic. Worse yet, from what I've read about surgeries for such issues, there's something like a 50-60% success rate. Awesome.

Winston, of course, is oblivious to what anyone says. Despite instructions to "take it easy" he's running everywhere and jumping around like the Energizer Bunny on stimulants.

Yesterday I found him here... 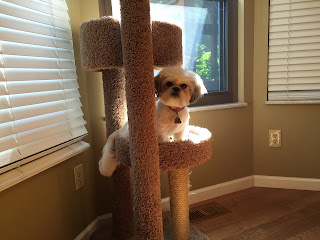 And speaking of cats, Bogey is the only critter in my house who doesn't have some sort of weird health problem. 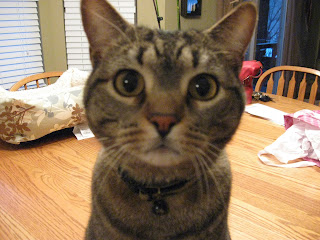 Another score for me in the game of cats vs dogs!
Posted by Pat Wahler at 9:06 PM

It's sad that Winston has so many painful and costly health issues. Hope you get some better news.

I am so sorry to read about the health problems in your house. We had a dog with complex medical needs once and I understand the stress (both financially and emotionally). hugs.

Oh dear, your little guy is a ball of energy and nothing is going to slow him down. Maybe surgery. Having fur babies is like having another family member. Will he get progressively worse or learn to live with it? My daughter has a crippled cat and the vet said she would adapt. He sure is a cutie. And oh that little Henrik is gorgeous.

Poor baby. We send you lots of hugs
Lily & Edward

OMG. Sincere sympathy to you, Winston, and your wallet:(

Pat--First of all, how did Winston get onto that platform? Does he think he's part cat?

Secondly, look on the bright side. Winston could have FOUR bum knees, instead of just two. If you keep that in mind, you're actually getting a 50% discount.

Thinking of you during your critter crisis. Hoping for a positive outcome!

Poor Winston! And poor you, too. I can both sympathize and empathize. Our Lab mix, Rigby, has had surgery on both of his knees (we're talking thousands of dollars...sigh...), but we couldn't stand to think of the poor guy limping and in pain for the rest of his life. He's almost nine, but we're sure he's got many good years left, so we did the surgeries. Tough to keep him quiet, so I can't imagine you keeping a puppy quiet for that long. Lots of meds, I guess, to make him sleepy for the first few weeks. The upside is that the surgery, if successful, will ensure your little guy's happy romping for the rest of his life. Rigby's surgeries made all the difference in the world. He's running, jumping, and playing again, which made it worth every penny we spent. His housemate, Penny, has no issues, thank goodness. But she's happy Rigby can run around the yard with her again. Good luck with Winston!

Bogey is such a doll baby. I hope you had a serene Sunday and that Winston is doing okay.
Take care.