Our Paws are Crossed 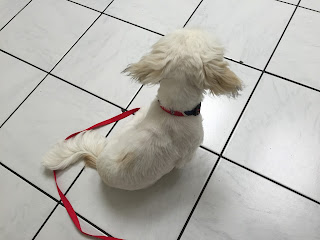 Today was the day. Winston and I trekked our way across the mighty Missouri for a second consultation with the veterinary orthopedic surgeon regarding his wonky little front legs.

Since both legs are bad, they both need surgery. The vet said we could do one and then do the other at a later date, if I preferred to spread out the cost, but his recommendation was surgery on both front legs at the same time...a double ulnar ostectomy.

The procedure basically entails removing a small section of the ulnar bone on each leg and inserting some fat taken from Winston's leg in between the two sections of bone. This (hopefully) will allow the still-growing radius bone to grow without being pulled into bowing out even more than it is now because of the no-longer-growing ulnar bone. After surgery, Winston will be in the hospital for 1-2 days and then placed on 4 weeks of rest, while we cross our fingers for success.

Definition of success: Improvement. I've been cautioned that his legs will never be perfect, at least until the veterinary world comes up with a satisfactory knee replacement procedure. The bad news is there's a chance everything could be for naught, as surgery could worsen his condition. Since I think that can be true for any surgery, I decided to press on.

I must admit to whining a tiny bit to the vet since we've already spent $700+ just for consultations, exams, and x-rays. He must have taken pity on me as he said he'd see what he could do. When he gave me the cost for surgery on both legs, it actually turned out to be far less than what I imagined it would be, although still enough to put a decided dent in the old pocketbook.

After thinking it over for about a second, I decided to go ahead and have both legs done at the same time. Who needs a second anesthesia and a second 4 week recovery period? Not us! Let's get on with it and hope for the best.

So Winston is scheduled for surgery next week on June 1. Positive thoughts and crossed paws would be much appreciated. Thank you! 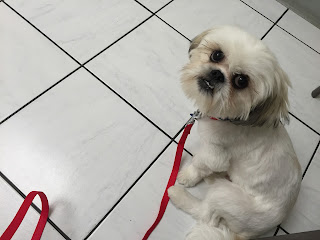 Poor little Winston! He is lucky, though, to have a mom who loves him and is helping him get his legs fixed. All good thoughts for you both.

It sounds like it is a risk you have to take if it may improve his legs. We will be thinking of you on Wednesday.

Oh wow! That sounds like a pretty big procedure. Sending lots of POTP your way!

Oh my goodness poor baby. I had 2 surgery on my back and one on my knee
Snorts,
Lily & Edward

Winston has a good mommy. My daughter's vet told her specialty bred dogs have problems. Hers did, too. Successful surgery,though. Hopefully Winston will do well, recover quickly and be up to his old tricks by 4th of July.

Winston, you little sweetie, we will surely send some POTP for a successful surgery. We think getting all done at once is the way to go
hugs
Mr Bailey, Hazel & Mabel

Poor little guy! I certainly hope the surgery is beneficial. I know doctors of all stripes have to provide the worst case scenarios just in case, but if that was always the case they wouldn't go forward with the work. Lots of "pawsitive" thoughts coming your way.

So glad Winston's problem is going to be taken care of and it won't be as expensive as you first thought. Hope he mends quickly. He is such a sweet looking puppy who is lucky to be in such a loving home.

Good luck Winston! Hope surgery has gone well.
It's tough to have to make decisions like this for our loved ones.

Just stopping by to see how the surgery went. Sending tons of healing thoughts and POTP for Winston
hugs
Mr Bailey Hazel & Mabel