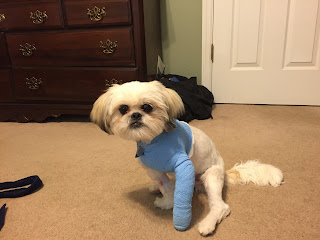 We are one day post-surgery,and you may notice that only one of Winston's legs is bandaged. On the morning of surgery, the vet called me and said he woke up at 4:30 am thinking about Winston's case. He told me he had a strong feeling that he should not operate on Winston's right leg, since at this point Winston wasn't having any problems with it. The vet feared that surgery might make things worse for his non-limping leg.

To tell you the truth, I'm kind of glad. Winston is so pitiful with one bum leg, I can't imagine how we (meaning I) would be able to cope with two surgically altered legs at the same time.

As you can see, Winston is wrapped up in a weird way, almost as though he's on the tip-toe of his foot. That being the case, he doesn't want to put any weight on his leg at all, and hops around on three legs instead.

Poor guy. He's pretty miserable, and can't find a comfortable position to sleep. Since he's on a no running, no jumping, no roughhousing, no anything regimen; I try to put him in his crate to keep him safe. This is NOT a popular idea. Barking, and crying, and whining, oh my!

There's only one thing now that makes Winston happy. Food. He may well end up doubling his weight by the time all this is over. When Winston is clearing all the peanut butter from the Kong, he's quiet. This buys me about five minutes to breathe. Five.Whole.Minutes. 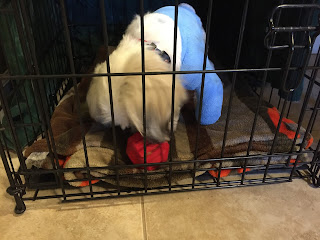 Oh, and guess what? In the midst of all the fun we're having, my daughter phoned. Seems her pup tore an ACL jumping on the bed. Now little Tinker Bell has surgery scheduled next week.

When it rains, it pours. Hope you're not getting as soggy as we are.
Posted by Pat Wahler at 8:37 PM

Oh, my goodness. He really does look pitiful. Poor little guy. And poor you! It was bad enough when our 8-year-old dog had surgery, I can't begin to imagine how tough it is with a puppy. Try to think about how happy he'll be when this is all over and he can run and jump and play. You're a great fur-baby mama, Pat. Winston is lucky to have you as his human.

You have the equivalent of a newborn with colic. This too shall pass. Take care if you, too. Poor daughter's dog. You can support one another.

You poor baby. We are happy you only got one leg done too
Snorts,
Lily & Edward

Poor Winston. I hope he heals quickly and is able to get the bandages removed. Poor you, as well. The description of an earlier post about a newborn with colic sounds about right.

Paws crossed for your daughter's pup as well.

Oh Pat--
Poor Winston. He looks pitiful. I think he needs extra treats to get him through his recovery. (You can pour yourself an extra glass of wine when you give him an extra biscuit.)

I do not envy you. But look at this way: You remember the show "The Six-Million Dollar Man"? Well, you will end up with quite a valuable puppy. (And couldn't you use black and white duct tape to jazz up the cast? Blue looks so gauche against his handsome black and white fur.)

Winston, we are sending lots of healing vibes for you sweetie. yes we can not imagine both legs bandaged up like that
hugs
Mr Bailey, Hazel & Mabel

I'm so glad the vet wasn't one to do needless surgery. You will be looking back and laughing at this time before long and Winston will be back to his lively happy self again.
Ann