Past Time for Change 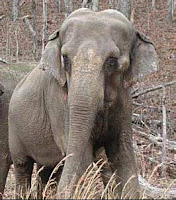 Lottie, former circus performer and current resident of The Elephant Sanctuary in Tennessee.

Yesterday PETA (People for the Ethical Treatment of Animals) released a video shot by an undercover employee for Ringling Brothers Circus. The video shows workers repeatedly beating elephants for no apparent reason other than to bully them. Though I don't always agree with PETA's tactics or all of their positions on animal issues, I don't believe anyone can look at the video and not be disturbed.

There has been heated debate for years about the use of wild animals trained to perform tricks for the amusement of spectators. I understand that people love to look at them. However, I strongly feel that using animals such as elephants, tigers, lions, bears, apes, and others is just plain wrong. Witness the times an animal returns to its natural behavior (it is, after all an undomesticated creature) and attacks a trainer/handler. The animal is labeled vicious, but whose fault is it really?

Certainly not the animal. It wasn't meant to live in a small confined space and perform tricks on command. And gross mistreatment from handlers doesn't do anything to improve this powder keg of a situation. In fact, other countries have outlawed or restricted this type of entertainment.

As consumers, we need to let circuses and carnivals know that it's time to evolve their acts into ones that are both civilized and humane. Bring on the trapeze artists, jugglers, high wire acts, and illusionists, but allow the animals to live as they were meant to live.

Cirque du Soleil is the perfect example of an organization able to put on a fine show without the use of critters.

Can't other such groups learn something from them?
Posted by Pat Wahler at 7:00 AM

Circuses with animals are not banned nationally here in Britian, it is left to individual town or county councils to ban them, which they frequently do. However, there are almost no circuses left with animal acts in them because of public protests and pressure.