Should He or Shouldn't He? 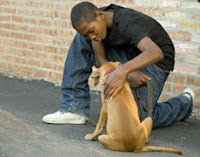 Image from the Humane Society of the United States website.

The debate rages on whether Michael Vick, recently released from prison after a conviction related to masterminding a dog fighting ring, should be allowed to return to NFL football. Some are passionately opposed. Some say give him another chance.

There is no doubt that the crime he committed reflects a complete lack of concern for other living creatures. And what he casually did to dogs who were deemed unfit to fight is beyond horrific. It's very difficult to get past that.

However, I believe in our legal system. Vick was tried, convicted, and served his time. He will continue to be monitored closely through a parole arrangement, and it's been announced that as part of his effort to make amends, he will be working with the Humane Society of the United States in order to get out the word to urban youth that dog fighting is wrong.

Is Michael Vick truly remorseful for what he's done? Is this only an elaborate ruse to revive a damaged career?

Only time will tell.

Michael Vick is getting the opportunity to redeem himself, so I'm ready to demonstrate some compassion.

I hope he's sincere about doing the same.
Posted by Pat Wahler at 6:35 AM

I am afraid I have found it impossible to feel any compassion for Michael Vick. His apparent remorse looks like self-serving cynicism to facilitate his return to NFL football. Tom and I have already e-mailed the Philadelphia Eagles to express our disappointment that they have signed him. I expect I ought to have more Christian charity in my heart, but I just can't summon any up for him.

This is indeed a dilemma. I would hope that he takes his second chance seriously and that he truly believes that what he did was wrong. It's hard to be in sympathy with him, but there's always the hope that some good will come of all this.

I agree with you. If he is demonstrating remorse then he could be a powerful voice for the voiceless. I hope he is genuine about this but if he isn't, it will come back and bite him (couldn't resist the pun). People are watching and waiting.