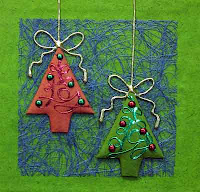 One of my goals for this week is to assemble and decorate the Christmas tree. It's not one of my favorite tasks (although much better than taking down the tree which is basically the entire process in reverse with the added bonus of after holiday exhaustion). But I do enjoy the beautiful scene once everything has been completed.

I am concerned about Bogey. Last year the beastly boy knocked ornaments off the tree and used them for kitty soccer balls that he batted around the room. He chewed at the ribbons on wrapped presents. He attempted to climb the tree. To discourage him I tried orange peels...no go. I tried squirt bottle...unsafe with electric.

I'm afraid that once this year's tree assembly is complete, he will be ecstatic with joy.

"Look! My very own tree! And it's all covered with dangley things that swing when I hit them! And nifty lightning bug lights, too! Thanks for the cool present, Mom!"

I don't suppose things will be much easier this year, so I've done some research on keeping cats out of trees. Some of the suggestions I found included: spray bottle (not so good with electric lights), loud noises (great as long as I'm present and vigilant), Bitter Apple spray (there's that liquid/electric thing again), orange peels (didn't work), cover bottom of tree with aluminum foil (kind of spoils the effect of putting it up in the first place), put tree in area where you can shut the door (but who can see it hidden away in the spare bedroom?), or keep cat under supervision at all times (are you kidding me?).

Only one suggestion seemed like something I'd try. Apparently cats don't like cinnamon. So this year I plan to sprinkle cinnamon all over my tree skirt. Of course that will probably turn the dark green felt to a grungey shade of brown, but no matter. If it works, I'm on board. Sounds like I'll need to stock up on several bottles. Maybe some cinnamon sticks, too. It's going to be an interesting experiment.

Thank goodness I love the scent of Snickerdoodles!
Posted by Pat Wahler at 5:00 AM

LOL! Good luck with the cinnamon! I don't know why I am laughing. I suspect Floyd is going to be a terror with the tree!

LOL! But Mom--it's Christmas, and Bogey is your ONLY Bogey...

My mother used to tell of putting the Christmas tree in the playpen the year I turned one--and maybe even two. So, when it was my turn to have a toddler at Christmas, I put the tree in the playpen, too. Worked like a charm. Unfortunately, Bogey is a cat, not a toddler, and can jump and pounce...

How about giving Bogey his very own little tree? I got a cute one at Hobby Lobby the other night that is about 3 feet tall and wasn't pre-lit. You could hang plastic "thingys" on it and let him have a blast with his very own tree!....BUT, how could you get him to ONLY want to investigate THAT one?!

Nothing says Christmas cookies like Snickerdoodles.
Wonder if we should get a tree for Michael's leopard geckos. I just finished feeding them some crickets; they are so cute.
Donna